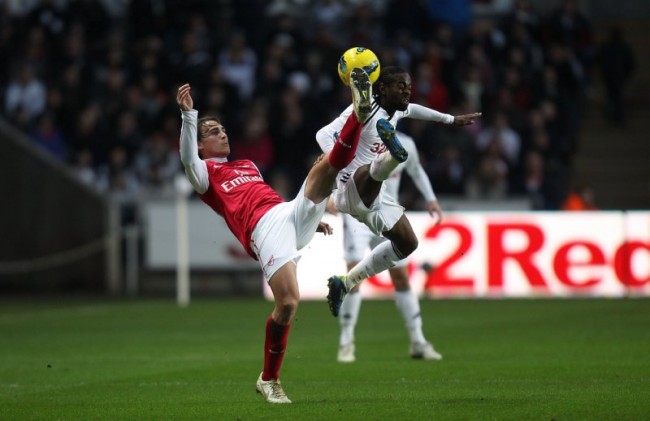 Arsene Wenger was left blaming the referee, Nathan Dyer’s sapling legs, his own porous defence, his own wayward attack and the poor bloke that ladles out the Bovril at the Liberty Stadium after watching his Arsenal side have their top-four aspirations kicked squarely in the nads in South Wales yesterday evening.

Swansea then went 2-1 up ten minutes after half-time through Dyer himself, before Theo Walcott raced clear to dink an equaliser past Michel Vorm. However, less than a minute later, Gylfi Sigurdsson threaded a through-ball past Lauren Koscielny down the right channel and Danny Graham lashed a low finish past Woijcech Szcczczczczczczcczzesny to seal the victory for the Welsh side.

“The game was decided by some strange decisions, the first by the referee was the penalty which was a complete imagination and it was a good dive by [Dyer].

“From then on there were other turning points like when we got back to 2-2 and made a defensive mistake, we showed a lack of appreciation for the ball and the defensive performance was not good enough.

“At 2-2 I thought we had a good chance to win as we looked dangerous and the keeper did well to keep them in the game and made some great saves, and we missed some unbelievable chances and the Bovril tasted like liquid dung!”

It’s also perhaps worth mentioning that Thierry Henry was caught up in an altercation with an Arsenal fan, making the universal hand sign for ‘yap yap yap’ in the supporters’ general direction and then motioned that the pair should continue their little summit on the pitch.

“No matter what, you should always support the team,” said Henry, referring – of course – to man that had just paid through the nose to travel to a different sodding country to watch his side spaff it up the wall.