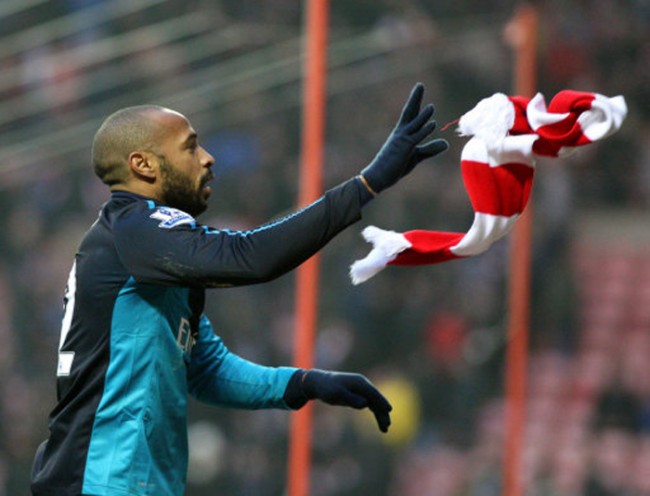 Some wondered if Thierry Henry’s brief return to Arsenal would damage his iconic status with the north Londoners, however, in netting his second winner (and third goal) of his loan spell against an impressive Sunderland side, the Frenchman has entered the realm of the God-like for Gooners all over the world.

Arsene Wenger’s men came to Sunderland on the back of a superb 7-1 mauling of Blackburn last week, but well aware that in Martin O’Neill’s Black Cats, they were facing the in-form side in the top division.

While the visitors had, as is often the case, the majority of the possession, they struggled to hurt a well-drilled Sunderland side with James McClean and Stephane Sessegnon looking lively. Indeed, it was the Irishman who would eventually open the scoring, running through on goal on 70 minutes after Per Mertesacker fell in a crumpled heap courtesy of a serious-looking ankle injury. The winger’s finish was emphatic, as he drilled the ball across Wojciech Szczesny and into the back of the Arsenal net. Indeed the home side could have been further ahead, only for a number of good saves from the Polish glovesman.

However, with Mertesacker off, sub Aaron Ramsey made his presence felt almost instantly, firing home from the edge of the box to level the scores and kickstart the Gunners’ fight-back. Then with just seconds remaining, Arsenal’s two other subs, Andrei Arshavin and Henry, combined to win the game for the visitors. The Russian, who has all too often disappointed this season, sent over a superb cross which Henry volleyed home from close-range to secure all three points on a day when Arsenal’s rivals for fourth spot all lost.