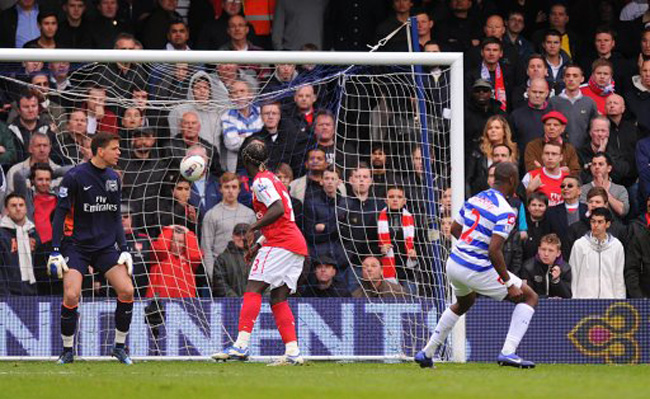 A below-par Arsenal were deservedly beaten by QPR on Saturday afternoon, with the home side producing a vibrant display which will give them the belief that they can dodge the drop.

Coming to Loftus Road on the back of seven straight Premier League wins, Arsenal never really clicked and were behind after just 22 minutes, when the much-maligned Adel Taarabt skinned  Thomas Vermaelen before producing a superb finish. The home side pushed for a second but it was the visitors who were next to score, with Theo Walcott netting on 37 minutes after his initial effort came back off the post.

After the break, the Gunners once again failed to spark, although Robin van Persie missed a great chance to put the north Londoners ahead with only Paddy Kenny to beat. However, on 66 minutes, Mark Hughes’ side went back in front, with Vermaelen again the villain for Arsenal. The Belgian centre-half slipped to allow Jamie Mackie to set up Samba Diakite, with the African midfielder firing past Wojciech Szczesny.

Arsene Wenger even sent on Marouane Chamakh to try to salvage something from the game, but ultimately it was the Hoops who would secure a well-deserved victory.

Rangers stay in the drop-zone, but only on goal difference, while Spurs can go level with the Gunners if they win on Sunday against Swansea.