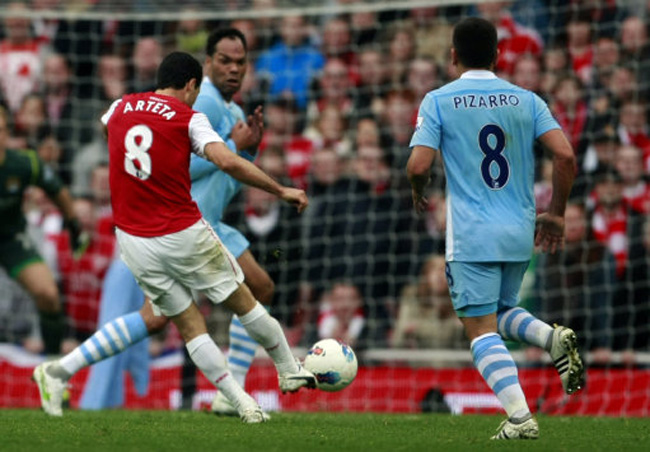 Coming into this clash at the Emirates, Roberto Mancini knew that if his gold-plated team was to keep alive their title hopes, then they needed to win. However, against an impressive Arsenal side, they once again failed to spark into life.

The joker in the pack for the Citizens was, as usual, Mario Balotelli. But rather than produce a goal out of nothing, the Italian gave a performance of pure ill-discipline. With only 17 minutes played, the former Internazionale starlet caught Alex Song with a ridiculous knee-high potential leg-breaker. However, referee Martin Atkinson somehow missed the red-card challenge and let play continue.

The Gunners should have been ahead early on, only for Robin van Persie’s goal-bound header to be blocked on the line by none other than Thomas Vermaelen.

After the break, the Citizens pushed for that all-important goal. However, it was van Persie who once again came closest to scoring, when his header came back off the post. City were again fortunate not to concede when Theo Walcott, Vermaelen and Yossi Benayoun all inexplicably failed to find the net in the same passage of play.

There was still time for Balotelli to finally receive his marching orders after picking up a second yellow for a pointless lunge on Bacary Sagna as City’s title tilt came to a shuddering halt.

As for Arsenal, they go two points clear of Spurs into third place.