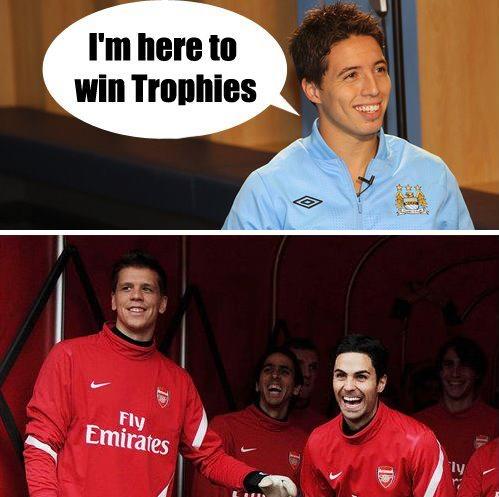 As is his perpetual ruddy-faced wont, smarmy ‘celebrity’ Arsenal fan Piers Morgan took to Twitter to gloat after his side put the kibosh on Man City’s title aspirations at the weekend – the dribble flecking his jowls as he amused precisely no-one but himself by aiming a few choice Tweets in the direction of City’s former-Arsenal contingent.

Samir Nasri eventually piped up to tell the wibbling chatwanker to concentrate on his own side’s fortunes, at which point Morgan dredged up the Frenchman’s parting shot across the bow upon moving from the Emirates to the Etihad last summer – that he was ‘leaving in search of trophies,’ or words to that effect.

Nasri replied: “I’m aware what I  said about titles, I’m sure I will lift a trophy with Man City before AFC,” at which point Morgan used a slimy trotter to slap a hefty £10,000 wager on the table, with the money riding on who gets their grubby paws on the next item of footballing silverware – Nasri or Arsenal.

Nasri duly accepted: “No problem. We bet and the winner gives the money to a charity.”