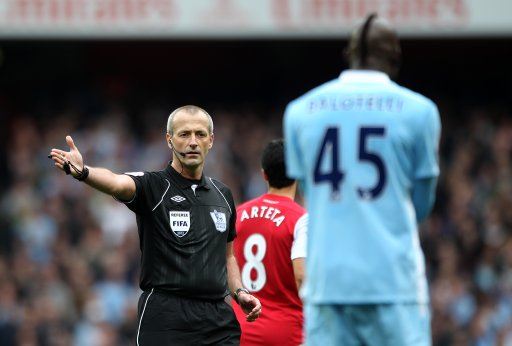 “Smashing tackle, Mario – but next time actually break his leg!”

Premier League football seems to be reaching a tipping point in terms of the relationship between match officials and clubs.  More and more managers are venting their frustration at the performance of referees and their assistants as more and more game-changing errors are being made by the men in the black. Well at least that’s how it has looked in recent months.

Coming hot on the heels of the FA’s decision not to rescind Shaun Derry’s ridiculous red card against Man Utd comes the news that mad Mario Balotelli is to face no further punishment for his appalling knee-high assault on Alex Song at the Emirates on Sunday.

The reason? Apparently referee Martin Atkinson has told the powers that be that he actually saw the incident and judged it not to be a foul. Therefore, the FA’s hands are apparently tied and so the reckless Italian loon gets away with it.

Yet again, I really do not know how Atkinson or, indeed, the FA can justify this decision.

Surely this whole ‘respect’ deal is a two-way street?