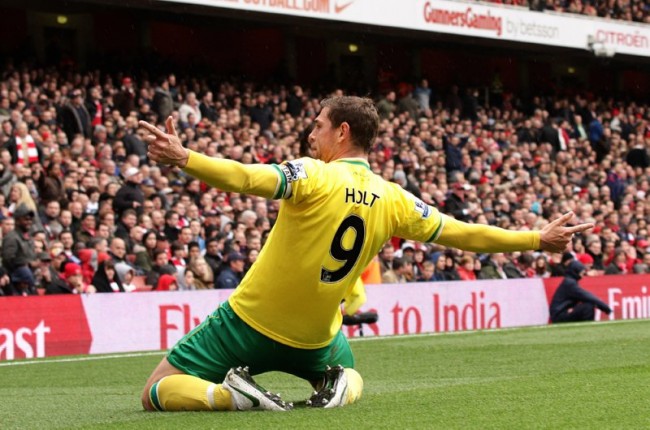 Arsenal’s grip on their Champions League spot suddenly became incredibly tentative after coming back from 2-1 down to 3-2 up, only for Steve Morison to nab a deserved equaliser for Norwich in the last five minutes.

Yossi Benayoun opened the scoring after just 65 seconds with a slinky little number but Arsenal found themselves 2-1 down at the break after Wojciech Szczesny wafted Wes Hoolahan’s tame effort over his line and was then left stranded as Grant Holt ballooned the Canaries ahead with a heavily-deflected shot from the edge of the area following a quicksilver counter-attack.

Robin van Persie took his league tally to 30 goals with a brace; the first a cute volley, the second a predatory strike on the turn – only for Morison to restore parity once again, bursting in behind the Arsenal back four and leathering a finish low across Szczesny in the 85th minute.

The result leaves Arsenal in third on 67 points and one game left to play, with Tottenham and Newcastle in fourth and fifth respectively on 65 points with two fixtures remaining.