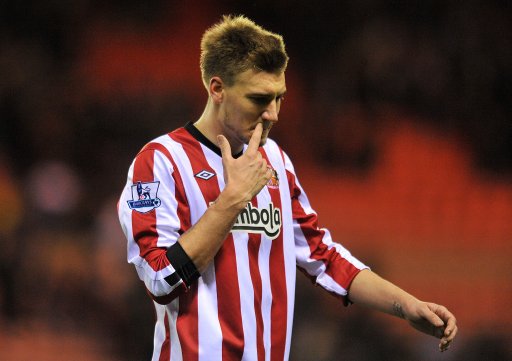 Talking to Danish magazine Cover Man, Nicklas Bendtner has claimed to have been the victim of a deliberately spiked drink, recalling one particular night out at London nightclub Boujis last year that saw the bleary-eyed Dane papped with his trousers around his ankles while attempting to leave the scene without attracting any undue attention – an incident which later cost him two weeks’ wages.

“I was out with a friend who I was visiting and we were doing shots. When I woke up in my bath my mind was totally blank. I was told that I’d lain down and had to be pulled from the water.

“The club had been closed for an hour at the time and then someone obviously called the paparazzi. I was drugged, I think.”

Cue the inevitable ‘he plays like he’s on drugs’ jibes…

Bendtner, who also revealed that similar nefarious stunts had been pulled on his friends in Denmark which left them hospitalised, then told Cover Man that he’s since scaled down his drinking habits…well, sort of anyway:

“The days when I stood on the table and was the biggest idiot are gone, though they may be coming back once or twice more.”

Of course, the fact that there are people out there deliberately targeting Bendtner and his ilk is a serious one and should serve as warning to football’s raft of other young, dumb party boys. Take a leaf out of Nicky’s book chaps; marching around town at night and kicking wing mirrors off cars is a much more gentlemanly pursuit.