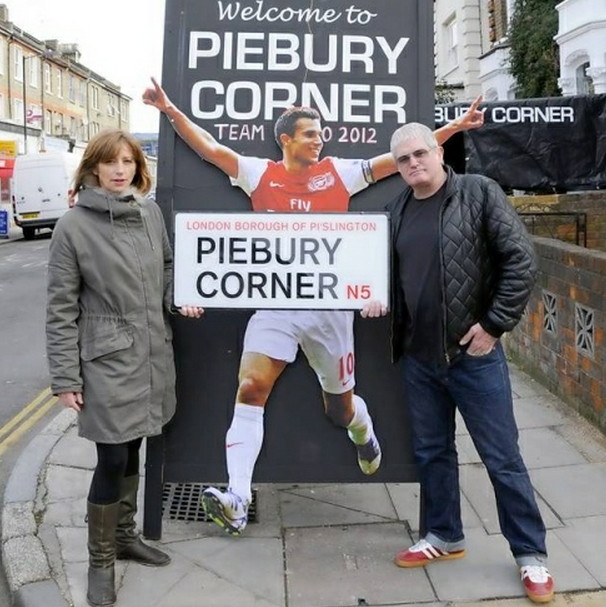 You may be of the opinion that Arsenal failed to win anything during 2011/12, but we’re here to tell you that you’re so goddamn wrong that it’s actually a little embarrassing just how wrong you are. After seven years of diddly, the club fought off some serious competition from the likes of Chelsea and Brighton to finish top of the Football Pie League. Mmm, lovely pies.

However, the awards ceremony in Brighton was marred by ugly scenes and acrimonious controversy when the club’s official caterers mosied up on stage and accepted the trophy, despite the fact that most of the club’s votes were accrued by 8,500 fans voting for the pies purchased at Piebury Corner – an independent stall set up by husband and wife Paul and Vicky Campbell in the corner of their front garden selling gourmet pies (named after several Arsenal legends) on matchdays.

“We went up to collect the award and we were all standing on the stage together, but the caterers took it. I said ‘that’s our trophy’, but they said it’s got to go back to Arsenal.”

The Gazette also goes on to report that Delaware North, the licensed Emirates caterers, were at the ceremony for a different award altogether and had no idea the pie prize even existed until it was announced, yet they refused to give it to Piebury Corner.

Understandably, fans of Piebury Corner’s pastry-based wares were incensed by the flagrant miscarriage of justice and bombarded Facebook and Twitter to expose the controversy and fling abuse at the guilty parties – accusing Delaware North of ‘pie-jacking’ the award.

However, the organisers have since issued a statement saying that Piebury Corner will be presented with a replica trophy before the beginning of next season – which, they’re hoping, should be enough to persuade RVP to stay.

Via Islington Gazette (thanks to @PieburyCorner themselves for the tip-off)