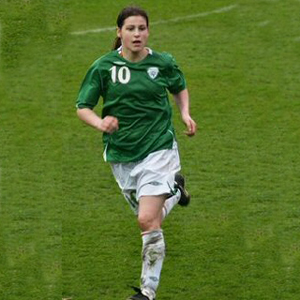 After securing the first-ever women’s Lightweight boxing gold-medallist, Irish heroine Katie Taylor was rumoured to be on the radar of Women’s Super League champions Arsenal.

The Bray-born 26-year-old is an experienced Irish football international, representing the Girls In Green on 40 occasions. However, as her boxing career took off, she took a step back from football around four years ago. But now, having achieved all there is to achieve in amateur boxing, Taylor may well be about to put her boots back on, with the Gunners ready and waiting.

According to Taylor’s dad, Pete, the time is now right for his all-conquering daughter to hang up her gloves and return to the football pitch. Ahead of Taylor Jnr’s successful final appearance against Sofya Ochigava, her old man said:

“She’s done everything, she’s been boxing a long time now, she’s sacrificed her life for boxing at the moment. We’ll sit down as a family and speak about it (her ending her boxing career). Maybe she’ll go back playing a little football, it’s a little bit safer!”

And in relation to Arsenal’s reported interested in his daughter, he said:

“Ya, she’s got a good few teams interested in her at the moment, but she’s got to get back playing.”

For club famous for their attractive football, getting a (genuine) fighter such as Taylor in their ranks won’t do the Gunners any harm. And she can also follow in the hard-punching footsteps of Gunners’ legend Paul Davis.