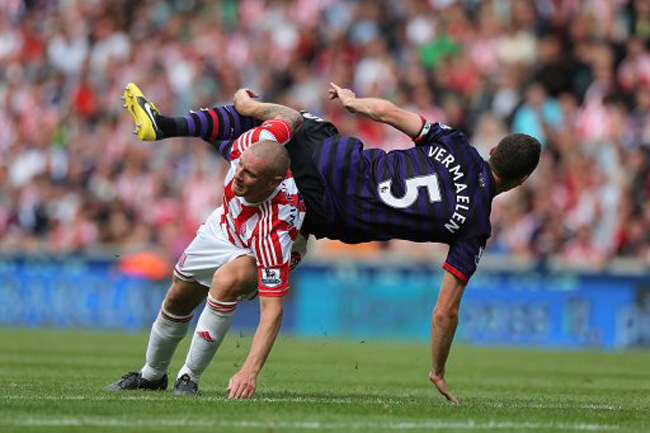 Arsenal made it two goalless draws out of two this season after failing to find a way past Stoke’s defence at the Britannia Stadium.

As expected, the Gunners had the vast majority of the possession but their RVP-less front-line struggled to create a clear cut chance. Santi Cazorla bossed the midfield in the first half but tired after the break, while fellow new-boys Lukas Podolski and Olivier Giroud worked hard without really troubling Asmir Begovic in the Stoke goal.

Irish international Jonathan Walters did have a chance late on but produced a feeble end product while Giroud attempted a long-range Hollywood goal when a square pass to the unmarked Aaron Ramsey was the better option.

Oh, and speaking of Ramsey. The Stoke fans once again loudly booed the young Welshman when he came on as a sub. I know that they are unhappy that the Arsenal man didn’t respond to Ryan Shawcross’ communication just after his infamous leg-break. But for God’s sake, he’d just had his leg smashed. An appalling showing by the fans at the Britannia and utterly beyond justification.