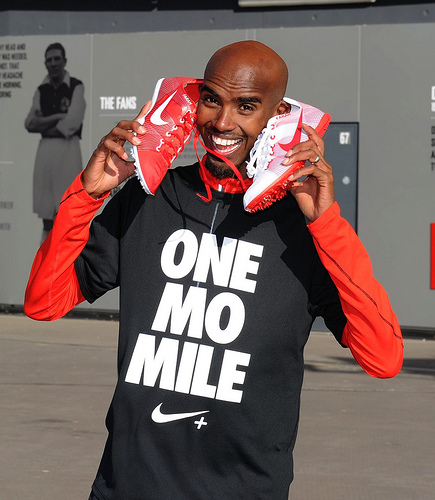 “If you listen closely, you can hear perpetual disappointment”

Fresh from doing the rounds, performing the ‘Mobot’ salute on every single TV show in Christendom, double gold-medalist Mo Farah is facing the grim reality of reentering the mundane post-Olympic drudge of club athletics – so it’s only natural that he should try to use his new-found standing as whatever the male equivalent of a ‘national sweetheart’ is to good effect.

Hence, he’s politely mentioned that he’s interested in joining the backroom staff at his beloved Arsenal as a fitness coach. Let’s face it, they don’t come much fitter.

“I don’t think I’d be any good at playing, but I’d like to help out at the Gunners for sure. I was talking to my wife the other day and I said: “I’d make a good fitness coach for the team or something.”

“I could try to help players if they were injured or going through hard times, be able to do little things with them.”

Helping injured players? Christ, in that case Moseph, you’ll have your bloody work cut out at Arsenal. Sure you want to knock long-distance yomping on the head quite yet? Seems like it might be slightly easier on both body and mind to stick to running a gazillion miles a day.