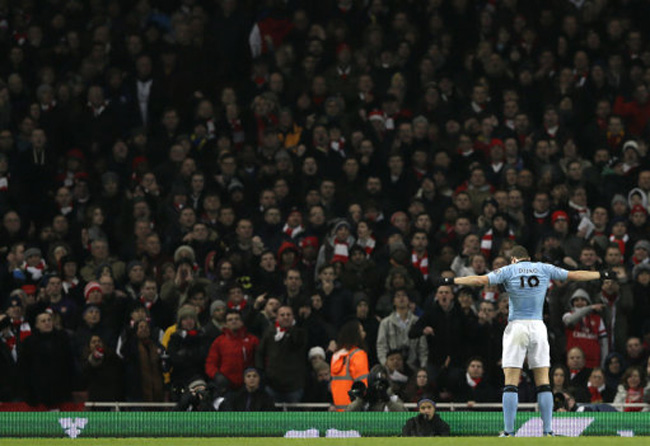 Arsenal’s lack of defensive discipline once again cost the Gunners any chance of winning on Sunday, with Man City ultimately running out 2-0 winners at the Emirates.

Laurent Koscielny saw red after just 9 minutes, after the gaff-prone French international was sent off by Mike Dean for denying Edin Dzeko a goal-scoring chance. While it was debatable whether or not Dzeko would’ve got to the ball, Koscielny’s man-handling of the striker was silly at best. After the centre-half traipsed off, Dzeko managed to miss the penalty to give the 10-man Gunners some kind of hope of staying in the game.

However, it was then the turn of Thomas Vermaelen to switch off, with the Gunners’ captain going to sleep before James Milner fired home a superb right-footed effort on 32 minutes.

Dzeko doubled his side’s advantage soon after, after Kieran Gibbs was initially caught out of position before the big Bosnian eventually swept home from close- range after Wojciech Szczesny could only parry Carlos Tevez’s effort. And with an extra man and a two-goal cushion, City’s work was pretty much done.

Arsenal did rally in the second-half, with Jack Wilshere once again one of the few Gunners showing any real desire.  However despite fashioning a few semi-chances, the home side never got themselves back into the game. The Citizens also found themselves down to 10 men in the second-half, after Vincent Kompany was penalised for what was a very good tackle by Dean. But in the end, the Citizens still  secured a well-deserved three points.

One positive for Arsene Wenger will be the return of Abou Diaby. However, the lack of defensive solidity, amongst many other things, doesn’t bode well for the north Londoners’ hopes of a top-four finish.

City, on the hand, stay seven points behind Man Utd.