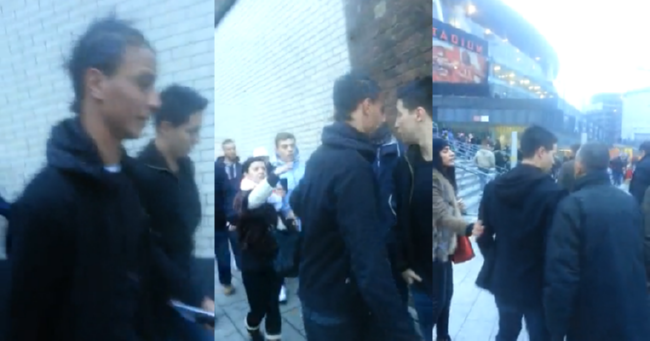 It’s safe to say that Samir Nasri doesn’t rate particularly high in the popularity stakes at The Emirates these days after he followed the coin to Man City a couple of windows ago, so you’d have to question his judgement in deciding to walk to yesterday’s game at the Emirates surrounded a horde of sweary Arsenal fans.

But walk he did, accompanied by Marouane Chamakh, who provided the best defensive cover of his career in attempting to shield Nasri from the baying crowd by acting as the suspended City midfielder’s personal bodyguard.

Due to embedding issues you’ll have to watch the video here, though we thoroughly suggest that you make sure you play this while doing so for maximum effect…

There are also rumours circulating on Twitter that Chamakh actually broke up a scuffle between Nasri and a particularly moronic Arsenal fan, presumably by wiping his head along the pavement and watching the gobshite fan just slide helplessly away into the distance on the resulting oil slick.