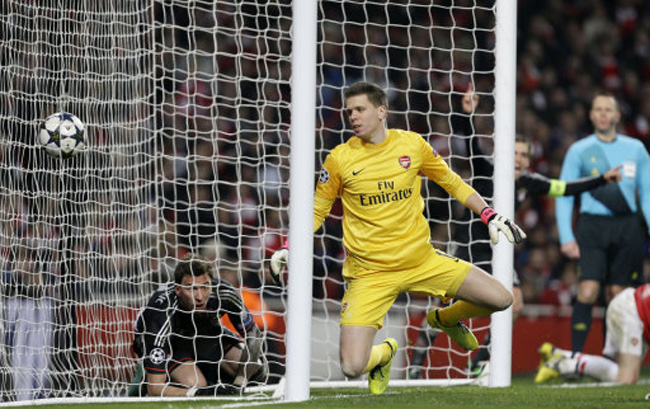 We’ve all had our embarrassing parent moments. And as a parent now myself, I’m making sure I cram as many in for my kids before the ungrateful feckers eventually fly the nest.

Arsena’s out-of-form ‘keeper Wojciech Szczesny is a rather embarrassed young man after his father publicly criticised Arsene Wenger for his treatment of Szczesny junior.

“Wenger already started to look for the scapegoat. It is not the way the boss should behave.

“Wojciech has had two serious injuries. He played with one in April and May [last year]. He shouldn’t have agreed to play that time but the coach insisted.  “

“Wenger was playing with the young man’s good health and Wojciech agreed foolishly…. In my opinion Mr Wenger messed up a lot in April and May. “

However, young Wojciech quickly apologised (or was forced to by the club!) for his dad’s comments on the Arsenal website, saying:

“I would like to apologise for the comments made by my father which have been used by both Polish and English media.”

“I’d like to make it clear that those were the views and opinions of my father and not mine, and although I respect his views I cannot accept them as I find them disrespectful to the club I truly love. I have been at Arsenal for seven years now and I have always shown my full respect to the club, Arsene Wenger, all the coaching staff, my team-mates and the fans.”

“I’ve always felt that I received great support from the manager and the fans and I am fully focused on getting back to my best. I am proud to be a part of Arsenal and I see my future at this great club.”

So there. Although it will be interesting to see just what the future holds for the Polish no. 1 at the Emirates, particularly with fellow countryman Lukasz Fabianski back in the team and the likelihood that Wenger will sign another ‘keeper in the summer.