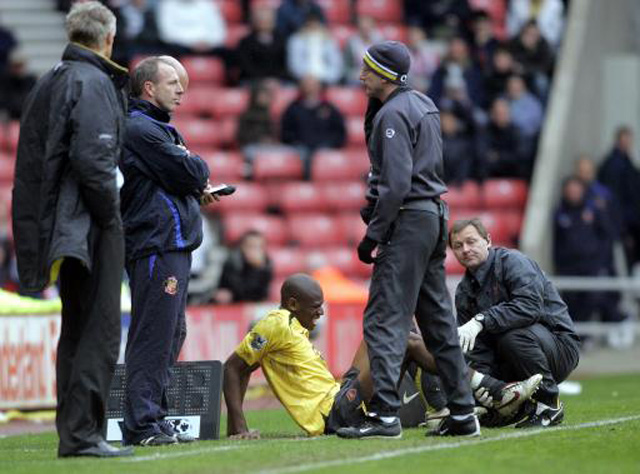 Poor old Abou Diaby, only days after speaking about how he has learnt to ‘manage his body‘, the gifted French midfielder went and gubbed his cruciate ligament in training. He’s now looking at another nine months on the physio table.

The 26-year-old’s Arsenal career has been one long stint in the treatment room, peppered with appearances on the pitch where his mix of physique and technique often hinted at what might have been. However now, with the player heading into yet another eight or nine-month period of recuperation, his future at Arsenal and indeed as a professional footballer are anything but secure.

It almost all comes back to one particular horrendous tackle in May 2006 by Sunderland’s Dan Smith. Arsenal were 3-0 up and the game was almost over, but the young defender for some reason decided to launch a vile studs-up assault aimed squarely at Diaby’s ankle. The challenge, which went without a sending off, both broke and dislocated Diaby’s ankle. And the rest is  a rather frustrating history for the Frenchman. Smith himself soon dropped down the divisions and now apparently works in a mobile phone shop.

Yes, Diaby is a rich man and there are, obviously, people out there with much bigger problems, but the player deserved sympathy, no matter what your footballing colours, for seeing his dream consistently crushed by injury after injury. Good luck Abou.

Oh, and the tale of Diaby surely highlights just how crucial it is that the FA start dealing properly with reckless challenges. What if Newcastle’s Massadio Haidera is never the same player again after the unpunished challenge by Callum McManaman?

Anyway, here’s the video of Dan Smith tackle for those so inclined…