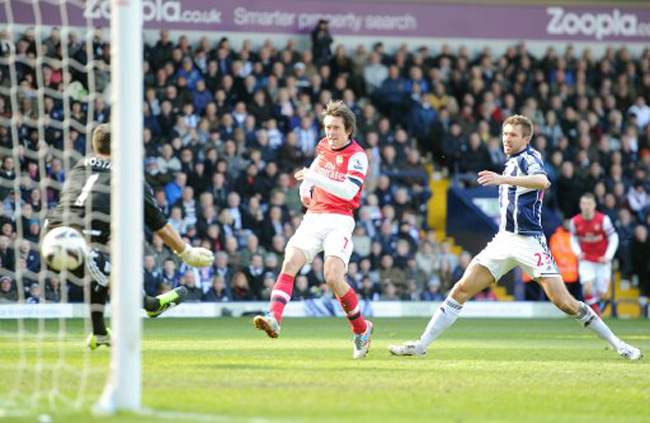 That injury-prone imp Tomas Rosicky was the star of the show for Arsenal at the Hawthorns on Saturday, bagging a brace as the Gunners kept the heat on Chelsea and Spurs in the race for Europe.

The Czech midfielder opened the scoring midway through the first-half, heading home a Gervinho cross/shot before doubling his side’s advantage on 50 minutes. Before scoring, the playmaker had even produced a headed clearance off the line to deny Claudio Yacob in a superb all-round performance.

Things did get very nervy towards the end for the visitors, after Per Mertesacker was shown red for hauling down Shane Long who was through on goal in the box. James Morrison drilled the resultant spot-kick under the legs of Lukasz Fabianski to set up a thrilling finale.

Sub Romelu Lukaku, Shane Long and Gareth McAuley all came very close to grabbing an equaliser as the Gunners defended their lead but ultimately it was the visitors who would take home all three points.

Arsenal go fourth, ahead of Chelsea, at least for a day, while the Baggies stay in eighth.