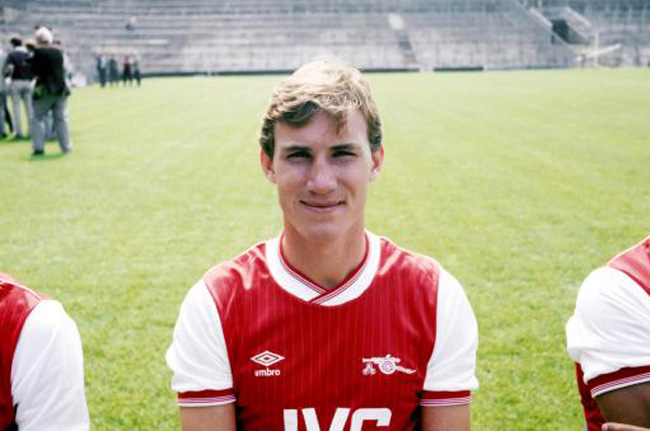 Stewart Robson in happier times, before his relationship with Arsenal turned sour

Surely in the running for the award for being the most bitter man in football, Talksport pundit Stewart Robson has had yet another go at Arsenal manager Arsene Wenger, this time over the Frenchman’s record in the transfer market.

News that the north Lodoners are now finally able to compete with Europe’s biggest clubs in terms of transfer deal hasn’t impressed the former Arsenal midfielder, who says:

“I am not expecting any marquee signings at Arsenal. There is a lot of talk about it, but I don’t know if I would trust Arsene Wenger with that money.”

“Over the last few years some of the players that he has said were going to be world class haven’t ended up like that – people like Philippe Senderos, Denilson, Marouane Chamakh, Armand Traore, Sebastien Squillaci, Nicklas Bendtner, Carlos Vela, Emmanuel Eboue, Park Chu-young, Lukasz Fabianski, Gervinho and Andre Santos.”

Robson, a fine combative midfielder who came through the Arsenal youth system before a series of injuries and loss of form saw him sold by George Graham in 1986, continued his typically scathing critique of the current Arsenal boss:

“Over the last two seasons they have spent some money on Olivier Giroud, Lukas Podolski, Mikel Arteta, Nacho Monreal, Per Mertesacker and Andre Santos. They haven’t been top-class players.”

“Some of the players who he has bought have regressed under him like Andrey Arshavin and Thomas Vermaelen. Nacho Monreal hasn’t been a good signing and Andre Santos has been hopeless for them.”

“Per Mertesacker and Lukas Podolski are past their best and Gervinho is another player who they spent a lot of money on and hasn’t really come to the fore.”

Now even the most blinkered Wenger-phile has to admit that their is some truth in what Robson says. However, to claim that Podolski, Arteta and Monreal for instance, aren’t top class players is just plain wrong.

What troubles Arsenal fans about Robson’s incessant sniping at Wenger is the fact that constructive criticism has been replaced by rather bitchy bile. Maybe it is linked to the fact that Robson was quietly ‘let go’ by Arsenal’s online arm at the end of last season.