Pies has the scores on the doors from a memorable night in the Nou Camp: 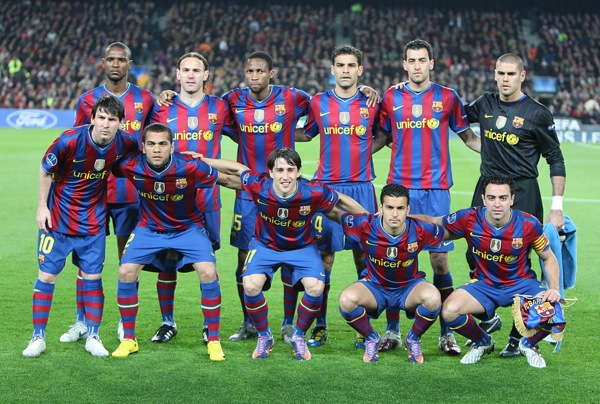 Victor Valdes – Little to do. VV spent most of the game watching Lionel Messi skip towards Manuel Almunia. Unlucky to parry Nicklas Bendtner’s shot back into the Dane’s path. 7

Dani Alves – Incredible work rate. He’s a genuine winger and full-back combined. You wouldn’t f**k with him either – he can be a nasty sod when the mood takes him and he’ll dive when he needs to. 7

Rafael Marquez – Concerns about his lack of pace unfounded. A solid display. Kicked Rosicky out of the game. 7

Eric Abidal – Kept on the back foot in the first half by Theo Walcott and as a result he made a couple of mistakes. Replaced by Maxwell early in the second half. 6

Sergio Busquets – I’m a massive fan of Biscuits. He was my man of the match in the first leg and he showed again what a terrific prospect he is, with a dominant display in midfield. He’s not afraid to get stuck in either, though he should have been booked for a professional foul on Walcott. 8

Seydou Keita – Much better than in the first leg. This time he was all over the place, but in a good way. 7

Xavi – The best midfielder in the world? Yeah, I think so. He misplaced just 15 of his 244 passes last night. Incredible. You can’t help but marvel at his control, intelligence and range of short passing. He makes the game look so simple. 9

Bojan Krkic – A quiet night. Didn’t do much wrong but was completely overshadowed by Messi. 6

Lionel Messi – I think we’ve all run out of words to describe Leo’s jaw-unhinging brilliance. I’ll go with a simple “wow”. Wow x4. 10 MAN OF THE MATCH (Who else!?)

Pedro – Some good runs and nice touches but his finishing was below-par. Works very hard for his team though, and you can see why Barca’s fans love him. 7 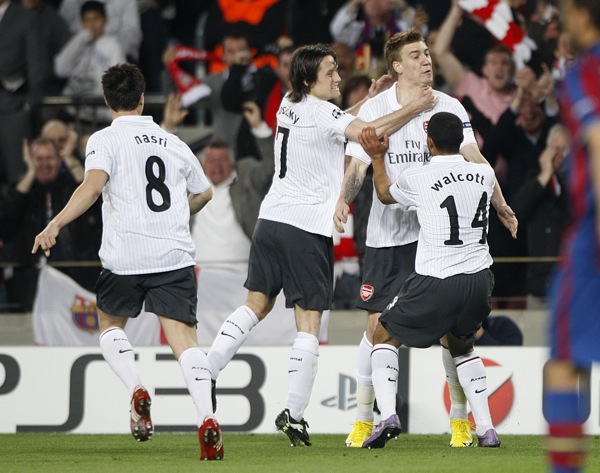 Manuel Almunia – Looked a bit nervous early on, when his distribution was patchy. Made to look foolish by Messi (no disgrace) for Barca’s fourth goal, but couldn’t have done much better for the first three. I’ll say it again though: Arsenal needs a better No.1. 6

Bacary Sagna – A typical Sagna performance. Didn’t do much wrong, but didn’t catch the eye either. 6

Mikael Silvestre – At fault for Messi’s first two goals. On the back foot all night. Will have nightmares about Messi for a long time. Would Sol Campbell have done any better though? 4

Thomas Vermaelen – Many of you threw your toys out when I failed to include Vermaelen in a Barcelona-Arsenal composite XI (I had Pique and Gallas as the centre-back pairing) but I think his two displays against Barcelona have proved that he is still a raw, inexperienced defender with a lot to learn. He was better in the second leg though, and put in a hell of a lot of work – but when Silvestre is your partner at the back and Messi is running at you, you’re in a world of pain. 6

Gael Clichy – A mix of good and bad, with more of the former. Ran his socks off and put in some decent balls (especially one for Bendtner in the second half) but also played Messi onside for his third goal. Still, he looks much more like the dashing Clichy of old than he did earlier this season. 7

Denilson – Very harshly booked for a legit tackle on Messi. The yellow card seemed to subdue the young Brazilian and he was never a factor thereafter. 5

Abou Diaby – So much better than in the first leg. He was everywhere for Arsenal, putting his long legs in where it counted. Set up Arsenal’s goal but should have released Walcott a second time when he had the chance at 1-0. Instead he passed to Bendtner and the attack came to nothing. 7

Samir Nasri – Worked very hard closing down Barca’s back four, then took a knock on his ankle that slowed him down. Never looked like getting the upper hand against Xavi, Keita and Busquets. 6

Tomas Rosicky – Clattered by Marquez early doors, didn’t fancy it after that. Too fragile, past it, must be sold in the summer – if anyone will buy? 4

Theo Walcott – Almost fucked up Arsenal’s goal with a nervous pass to Bendtner – a better player would have gone for goal himself. Still doubts his own ability – only his pace is without question. What would Theo give to swap 10% of his pace for just 1/100th of Messi’s talent? 5

Nicklas Bendtner – Certainly not overawed but in terms of ability he’s no Robin van Persie (well, in his head maybe). Took his goal very well but didn’t do a heck of a lot after that. 7