With a couple of major injuries, dominant possession and sloppy defending to lose a lead, this was a classic Arsenal 90 minutes, with the Gunners only managing to draw against an impressive Norwich City side. 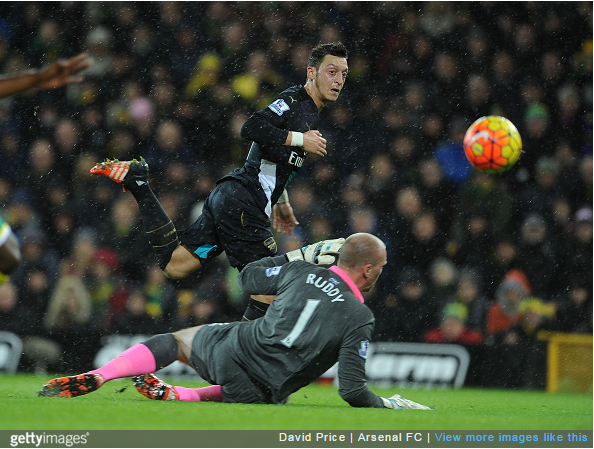 The visitors bossed the first half, and failed to find the requisite cutting-edge against against their well-organised hosts. The goal did eventually come on the half-hour mark, when Canaries’ ‘keeper John Ruddy fluffed a clearance. The ball fell to Alexis Sanchez who fed Mesut Ozil, with the German producing a superb dinked finish. The Gunners were dealt a blow with what looked like a hip injury to Laurent Koscielny, with Brazilian Gabriel taking the Frenchman’s place. And it was the sub who was at fault for Norwich’s equaliser just before the break, finding himself the wrong wrong side of Lewis Grabban, who fired past Petr Cech. Soon after, Wes Hoolahan had a great chance to put his side in front, only  to fire over from close-range.

In the second-half, the game opened up, with Robbie Brady superb on Norwich’s left. While the Gunners pushed for a winner which would put them level on points with league-leaders Manchester City, the hosts were always a threat. Arsene Wenger had spoken before the game of the questions marks over Sanchez’s hamstrings, and after a run into the box from the Chilean, he pulled up, to be replaced by Joel Campbell. Cech was then forced into a superb save after a Norwich cross glanced off one of his team-mates as Alex Neil’s men went for the win. But ultimately, both sides would have to make do with a point.

While Norwich will no doubt be pleased with the share of the spoils, Wenger and co. will be lamenting another missed opportunity and yet another brace of significant injuries, with the potential loss of Sanchez a huge blow. At least a wretched November is now over for the north Londoners.