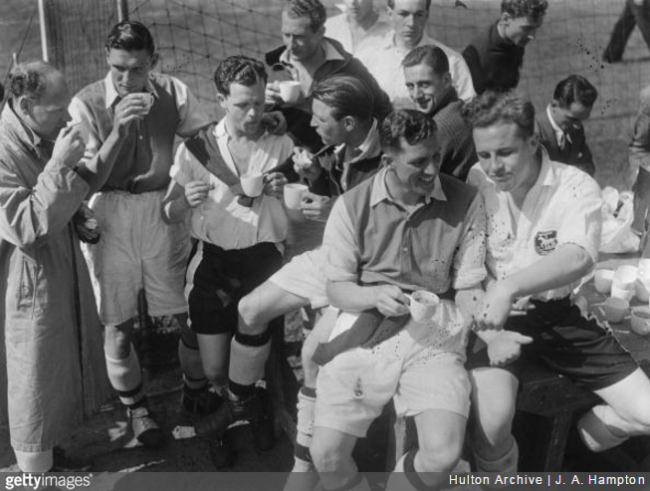 On 17th February 1940, the first film to feature football in any significant way opened in UK cinemas.

The Arsenal Stadium Mystery was not, as fans of Tottenham may think, the story of a search for the missing atmosphere at Highbury, and the ‘mystery’ part of the title did not refer to how the Gunners managed to drag themselves up into the First Division in the first place.

Instead, director Thorold Dickinson’s comedy-thriller told the story of how Inspector Anthony Slade (played by Leslie Banks) tries to solve the murder of a player who died from poisoning while fictitious side the Trojans played the famous Arsenal.

Famous Gunners Cliff Bastin and Eddie Hapgood featured in the film, and Dickinson used footage of a real game between Arsenal and Brentford.

The picture above shows the players having a tea break on set during filming.

While we’re on the subject, here are four more smashing cult football films as recommended by Pies…

A forgotten classic directed by Ken Loach, this film centres – as you might expect – on the experience of ordinary fans and how their lives are so closely linked to their football club.

It follows a group of Everton fans who miss all manner of family occasions to see their team play, and there’s much here about the escapism we find in the game.

Julie Welch’s semi-autobiographical script and Philip Saville’s direction deliever a piece that is now dated but still retains its charm.

This celebration of teenage obsession charts the fortunes of a group of schoolgirls as they follow Tottenham through the Double season in 1961, and it’s still one of the best screen portrayals of what the game can mean to people.

Just as an added bonus, the great Danny Blanchflower bookends the film…

Based on David Peace’s book of the same title, the film tells the tale of Brian Clough’s stormy 44-day reign at Leeds United.

Michael Sheen turns in an uncannily accurate performance as Clough (his accent is spot on), and the film accurately evokes the atmosphere of the time to wrap around the portrait of a genuine one-off.

It was, like the book, hugely controversial – with Clough’s family and many of the Leeds players refusing to have anything to do with it. But it’s not a documentary, it’s a dramatisation of an extraordinary individual making a living in extraordinary times…

Original, surprising and touching in equal measure, this film focuses on the American Samoa team that suffered a world record 31-0 loss to Australia in 2001.