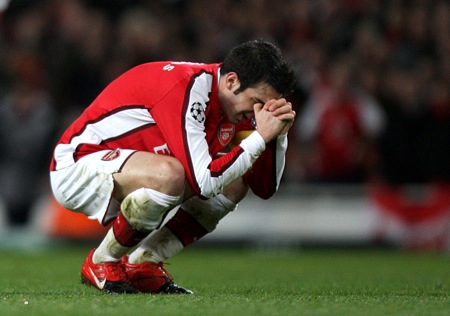 With regard to the blatant and relentless courting – tapping up, in effect – of Arsenal captain Cesc Fabregas, I believe Barca have brought the game into disrepute. Plain and simple. Except, of course the Catalans are above the law (they’re better than everyone else, remember), apparently, and well used to preferential treatment. If angry Gunners are waiting for Uefa to have a quiet word in Sandro Rosell’s ear, they’re in for a very long wait. Barcelona can do what they want, simply because they’re Barcelona, gatekeepers of the Beautiful Game.

Naturally, it’s been down to Arsenal fans to speak up about the harassment of Fabregas by Barcelona’s players, many of whom share a dressing room with Fabregas in the Spain national team; many of whom call Cesc a friend. But all of us should speak up – it could be your club next.

This will not stand, man.

At first, I’m sure Fabregas was flattered by Barca’s fluttered lashes. When the hottest girl in the room makes an effort to talk to you, how do think it feels? Of late though, it’s gone from flirting to flat-out stalking. When Carles Puyol and Gerard Pique forced Fabregas to pull on a Barcelona shirt, I cringed. I’m sure Cesc cringed too, inside (“Shit, this won’t look good”) – on the outside he grinned, ever the diplomat, but what the hell was he supposed to do? Twas a lowdown, ill-timed stunt.

As a Tottenham fan, this should be fun, of course. And I’m sure that for a lot of Spurs fans, it is a lot of fun. Watching your biggest rival subjected to drip-drip torture all summer long, constantly reminded that they could lose one of the best players in the world – what more could you ask for?! But Barcelona have crossed a line in their pursuit of Fabregas, to the extent that I have some sympathy with the Gunners.

At the end of last week, Arsene Wenger said enough is enough. But, Terminator like, Barcelona will not stop. Ever, it seems. Even today, Pep Guardiola talked of his desire to sign Fabregas, even though the player is blatantly NOT FOR SALE.

“I think bringing in Cesc will cost a lot… We want him to come, but if Arsenal don’t want to negotiate, he won’t come,” Guardiola said earlier today, in what appeared to be one final effort to prise Arsenal’s captain away from north London.

It’s as if Barcelona actually believe that if they keep on picking away at this scab of a rumour, Arsenal will eventually give in, like a parent of the spoiled only child who wants an ice cream: “Okay, okay!! F**king take him already. Jesus, anything to shut you up for one minute.”

This will not stand.