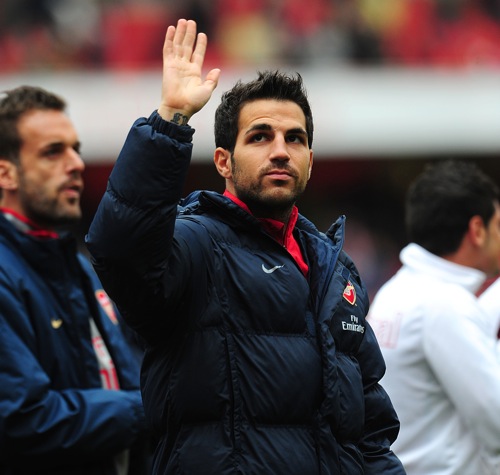 In which Cesc breaks his silence and confirms what many of us suspected:

“Firstly, I would like to apologise to all the Arsenal fans for not speaking sooner about my future but I’ve not known what I was going to do until this moment.

“I cannot deny that joining a club like Barcelona was not an attractive move for me. This was the club I learned my football, my hometown, where all my friends and family are and a club I have always dreamed of playing.

“There’s not many players in the world who would not want to play for Barcelona.

“I have had many conversations with Arsene Wenger, both in person and over the telephone in the last few months. And although the contents of those conversations will remain private the conclusion is that Barcelona have had two formal offers rejected by Arsenal.

“I am a professional and fully understand that is Arsenal’s prerogative not to sell me.

“I owe a lot to the club, the manager and the fans and I will respect their decision and concentrate on the new season ahead with Arsenal.

“I can assure all the fans that now the negotiations are ended I will be 100 per cent focused on playing for Arsenal.

“I am an Arsenal player and as soon as I step out on to the pitch this is the only club I will be thinking about. I am looking forward to the start of the season and putting all of this speculation behind me.”

So Barcelona can crawl under a stone for another season. As I’ve said before, their shameless pursuit of Fabregas brought football into disrepute, so this news is a small helping of karma. I hope it tastes like shit.