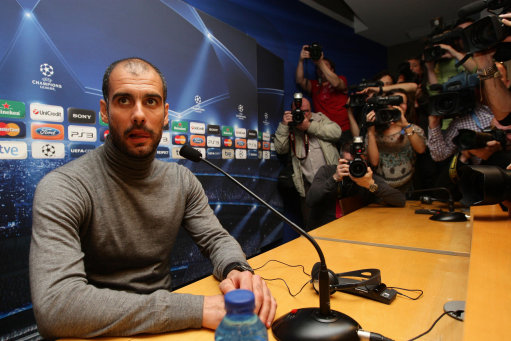 In an effort to placate himself with Arsenal fans ahead of tonight’s Champions League slobberknocker at the Camp Nou, Barcelona coach Pep Guardiola was full of praise for young Jack Wilshere in his morning press conference…for all of six seconds.

“Wilshere is a top player. He is an excellent player, not just Arsenal, but also for the national team.

“But I guess he is lucky because [Barca] have many players in the second team like him, but he plays every game because there is no pressure at his club to win titles.”

“I just play Jack Wilshere because he is good enough to play and because he deserves his place. I’m long enough in the job to know when a player deserves to play.

“It’s nothing do with what I have to deliver or whether I’m under pressure. It’s on Pep, it’s on like mother-humpin’ Donkey Kong you turtle-necked toss-arse.”

We’ll leave it to your discretion which quotes Pies may or may not have doctored.