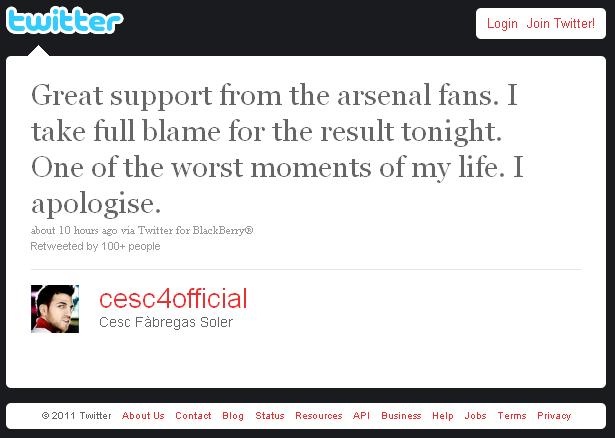 Arsenal captain Cesc Fabregas has taken sole responsibility (in 140 characters or less) for his side’s defeat in the Camp Nou last night after his ill-conceived backheel allowed Andres Iniesta to retrieve the ball, pick a path through the Gunners’ cramped defensive line for Lionel Messi, who rounded the move off by stubbing the ball over Manuel Almunia (Szczesny dislocated a finger with quarter-of-an-hour gone) and volleying Barcelona in front from close range.

Seven minutes after the interval, Arsenal pulled one back when Sergio Busquets’ mis-directed clearance pinged awkwardly off the near-side corner of his rectangular head and into his own net, though three minutes later came the incident that robbed Arsenal of any potential impetus they may have been sitting on – Robin van Persie left the field, and not on a stretcher as many people predicted.

After picking up a caution earlier in the first-half, the Dutchman saw yellow again for lashing a shot against the advertising hoardings after blatantly not cottoning on to the fact that he had indeed been called offside moments beforehand.

Said Van Persie after the game:

“I cannot understand that view from the ref. If there were four, five, six seconds in between, you can make a check (for offside). One second, it’s a joke.

“I tried to explain there were 95,000 people jumping up, how can I hear the whistle? We feel betrayed a bit, when it was 1-1 it was all to play for and in my opinion this referee killed the game.”

Still, Swiss referee Massimo Busacca saw fit to rid the game of the foul, time-wasting swine, and Barca took full advantage – swamping and cloying at the Gunners both defensively and offensively.

First Xavi, by way of a glancing deflection off Bacary Sagna, finished off an incisive passing move after Iniesta and David Villa had rushed the ball through Arsenal’s backline and then, two minutes later, Laurent Koscielny felled Pedro in the box with Messi clipping home the resultant penalty kick.

Arsenal manager Arsene Wenger was left fuming at the referee’s conduct in his post-match presser, claiming that he was ‘convinced’ his side were going to win the game before Busacca pulled the rug out from underneath them:

“I felt Barca gave a lot in the first half. We were completely dominated, I agree with that, but in the second half we felt there was more space.

“I knew that like the first game we could come back into the game and overall I’m convinced we would have won this game.

“I think two kinds of people will be unhappy – those who love Arsenal, and those who love the game. We are frustrated with [Busacca’s] decision. It is very difficult to understand his attitude.

“We lost against a very good Barca side, congratulations to them and good luck for the future, but we have many regrets tonight because we didn’t expect to lose the game like that.

“I feel sorry for the people who watched the game tonight.”

While RVP’s red card was ridiculously harsh and a fine indicator of the obliging incompetence that seems to fall in Barca’s favour on a few too many occasions as the Big Cup progresses, it’s an inescapable fact that the Gunners had to wait until the 75th minute for their first touch in Barca’s penalty area and that they duly went on to manage a grand total of ZERO shots (either on or off target), even in the 55 minutes they played for with 11 men on the pitch for Pete’s sake.

I mean, just have a butcher’s at the BBC’s stat table… 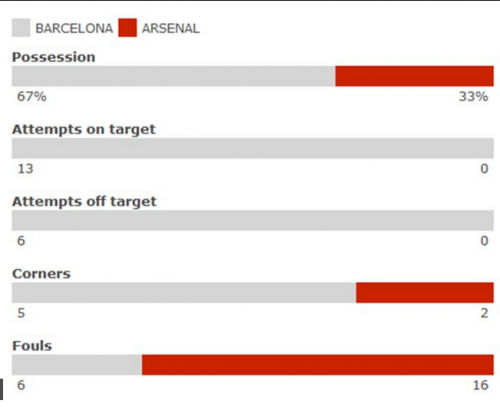 Even the most one-eyed Gooner must surely accept that he result was never really in doubt after the Catalans began to pulse.

What say you, one-eyed Gooners? Any thoughts on last night’s proceedings?