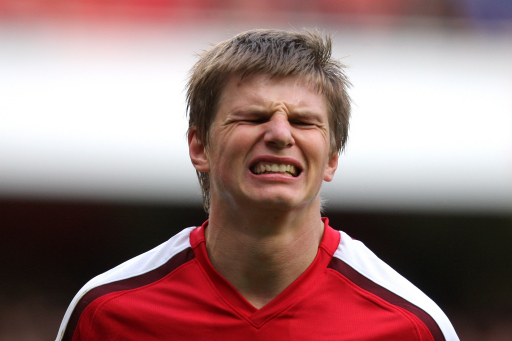 He came to north London on the back of a magnificent starring role at the 2008 European Championships, yet Arsenal fans have only intermittently seen the best of Andrei Arshavin.

The Russian captain has enjoyed some fabulous performances for the Gunners, including that four-goal solo show at Anfield a few years back. However, too often he seems on the periphery of the game and without the desire for hard work. Admittedly, he rarely plays in his favoured central role behind a striker, but with his talent, he still should be able to influence the game more.

Now, the player himself has admitted that his form could be better. “Speaking honestly, I think my performances for Arsenal have been average,” he said. “I’ve done some good things but I don’t assess my game on goals or assists – I look at the whole picture.”

“Normally when I’m on the pitch, I take control of a game but I haven’t really done that here. I’m an extra tool in the team rather than the main one, so it’s been different.”

The former Zenit St Petersburg star is well known for his honest and often self-critical utterances on his own website, but you have to wonder, maybe if he spent less time focusing on being “honest” and more on working harder for Arsenal, everyone would be happier.