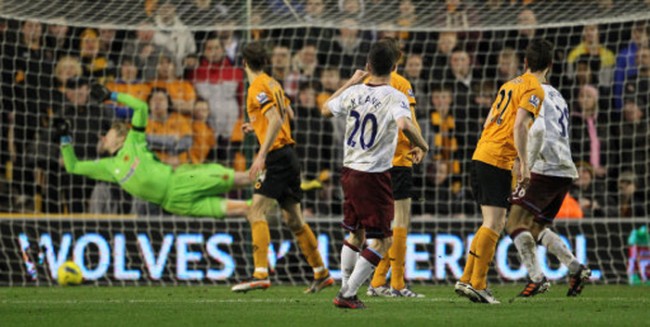 Joining the procession of MLS stars getting in a bit of off-season action in the Premier League, LA Galaxy striker Robbie Keane returned to the home of his first professional club, only to help send Wolves to a 3-2 defeat.

The 31-year-old, who joined Wolves from Crumlin United back in 1995, was the difference between the two sides, however it was team-mate Darren Bent who opened the scoring from the penalty spot on 11 minutes, after Christophe Berra had brought down the England man.

With Arsenal loanee Emmanuel Frimpong providing the spark in the Wolves midfield, the home side fought back, with Michale Kightly (on 21 minutes) and then David Edwards (on 31 minutes) putting Wolves ahead.

However, with only five minutes of the second-half gone, the Villans got themselves back into the game, courtesy of a superb dipping effort from Keane. Wolves then saw Frimpong stretchered off after he was (accidentally) kicked in the face by Stiliyan Petrov, while their chance of a comeback was made all the more difficult when Karl “not that kind of player” Henry was sent of for kicking out at Marc Albrighton.

Ultimately, it was Keane who would steal the show, firing home a magnificent strike late on to win the game and keep his old club firmly in the drop-zone.