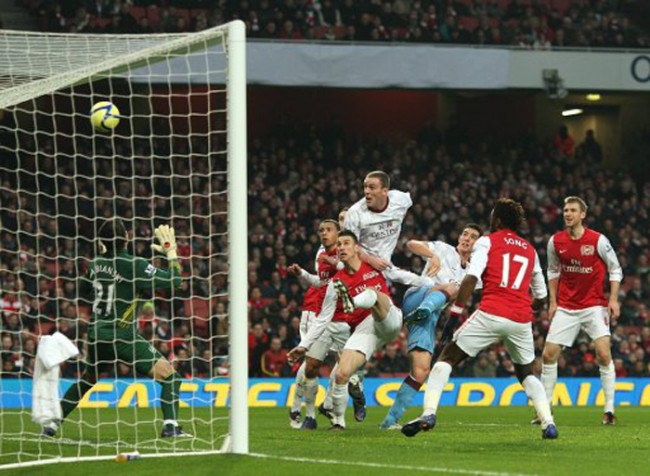 With Aston Villa going in at half-time two goals up, Arsene Wenger would no doubt have been preparing himself for a mountain of abuse from the Emirates crowd for the rest of the afternoon. However, thanks to a superb seven-minute surge straight after the break, the Gunners secured a vital victory and a place in the fifth round of the cup.

It was business as usual for the home side in the first-half, having the majority of the possession without scoring before crumbling at the back, not once but twice, against a fleet-footed Villa side.

Football’s one and only Honey Monster Richard Dunne opened the scoring for the Villans just after the half-hour mark, as the Gunners once again failed to deal with a set-piece, leaving the Irishman to head home from a corner. Darren Bent then doubled the score on half-time, netting superbly from the narrowest of angles after Lukas Fabianksi had stopped his first effort.

Whether or not Wenger produced a hairdryer moment in the Arsenal dressing room remains to be seen, but on the re-start the Gunners were a different side, cutting through the Villa defence again and again. Robin Van Persie netted the first of two spot-kicks for the Gunners on 54 minutes, after Dunne fouled Aaron Ramsey, before scoring his second penalty of the game just seven minutes later, this time after a rampaging Laurent Koscielny was felled by Bent. Those two RVP penalties sandwiched a rather fortunate Theo Walcott goal, with the ball coming back off Shay Given before rebounding off the winger’s face and back into the Villa goal. Although to be fair, Walcott had created the initial chance himself superbly.

Oddly, after ripping Villa to shreds in the first half of the second period, Arsenal then dropped deep and allowed the visitors to once again threaten Fabianski’s goal. Indeed, Stiliyan Petrov and the rather disapppointing Stephen Ireland had decent chances to level the scores again. However, ultimately, Wenger would find himself on the receiving end of some cheers rather than jeers, as the Gunners battled through to the fifth round of the Cup.