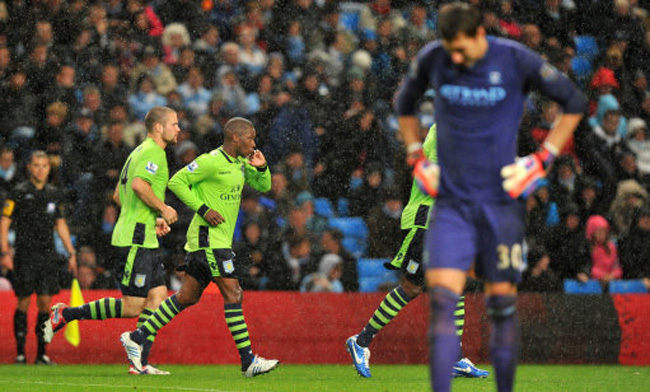 Coming just days after City were pushed all the way by Arsenal at the Etihad, the home side once again struggled against Premier League opposition, this time in the form of Paul Lambert’s Aston Villa.

Roberto Mancini made 10 changes to the side who drew with the Gunners at the weekend, but the Italian boss son’t be pleased to ship four goals at home.

Mario Balotelli opened the scoring for the Citizens on 27 minutes but the scores were level on the hour mark, courtesy of a Gareth Barry own-goal. A Aleksander Kolarov free-kick once again put the home side in front before Gabriel Agbonlahor, a player who has somewhat faded from the spotlight in the last year or so, equalised on 70 minutes.

With the scores all-square at full-time, the game went into extra-time, with City struggling to breakthrough an organised Villa side. Ultimately it was the visitors who progressed, after goals from Charles N’Zogbia and Agbonlahor topped off a great night for the Villas. City, on the other hand, will have to tighten up at the back if they are to get their hands on silverware this season.