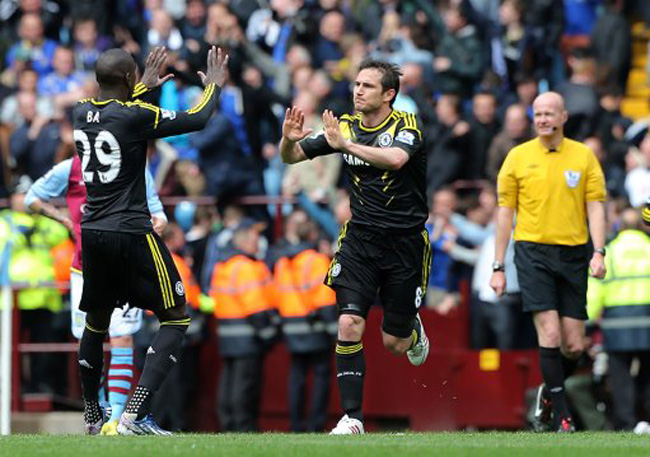 Frank Lampard was the star of the show at Villa Park on Saturday, with the midfielder netting a brace in Chelsea’s 2-1 comeback win. Those goals make the England man, who is set to be released by the Blues this summer, the club’s record-goalscorer while they also all but rubber-stamped the west Londoners’ participation in next season’s Champions League.

An eventful game saw Christian Benteke score superbly for the Villans, this time on 14 minutes to give Paul Lambert’s side the lead. The Belgian was then involved in a controversial incident, when he appeared to elbow on Cesar Azpilicueta, only for referee Lee Mason to deem the action worthy of just a yellow. Chelsea themselves then had Brazilian Ramires given his marching orders (for a second yellow) just before half-time.

However, Belgian hitman Benteke was himself shown red just before the hour mark, after a high challenge on John Terry earned him a second booking. Soon after, with both sides down to 10 men, Chelsea found the equaliser, courtesy of the irrepressible Frankie Lamps. That goal drew the midfielder level with Chelsea top-scorer Bobby Tambling, but he wasn’t finished yet and with just two minute of normal time left, Lampard tapped home from an Eden Hazard cross to make it a record-smashing 203 goals for the Blues.

Prior to that goal, Demba Ba looked to have nicked the ball over the goal-line only for the officials to ignore the visitors’ goal shouts while both John Terry and Hazard went off injured before the end, with the two players now serious doubts for next week’s Europa League final.

The win sees Chelsea all but secure a Champions League berth next season. They now find themselves six points clear of fifth-place Spurs with a far superior goal-difference. Aston Villa, on the other hand, are now five points clear of 18th placed Wigan, although the Latics do still have two games to play.