ASTON Villa’s Gabby Agbonlahor has been the subject of death threats on Twitter following his tackle on One Direction and Doncaster Rovers’ Louis Tomlinson at a charity football match for former Villa and Celtic man Stan Petrov, who was diagnosed with leukaemia.

After the forward’s challenge, Tomlinson went to the sidelines and threw up.

“@gabby_10 This guy hurt Louis knee. I shall hurt your face. I better hear that you apologized or I will find you, and I will kill you.”

“You’re really not a good person, louis came to a charity game and it took you hurt him. You’re horrible die” – @Zuleikha92: @gabby_10

“@gabby_10 This guy hurt Louis knee. I shall hurt your face. I better hear that you apologized or I will find you, and I will kill you” – @Omg_Its_Ella

@Louis_Tomlinson Are you ok?? If he hurt you I promise that I’ll kill him!!! No one can hurt my baby!!! Grrrr!! pic.twitter.com/N6WeDKeopA — Isa Salamanca (@isa_loves_One_D)

You can see the effect of Agbonlahor’s challenge below… 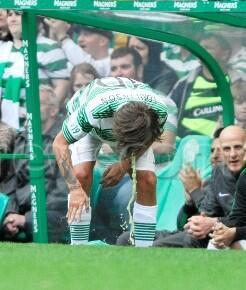 Some tweeters were bothered in a different way

David Gilling @gilling_david @FootyHumour @Louis_Tomlinson LMAO What a legend Gabby lad!!! Even funnier than the smashing is the fan girls crying!

Tony Crawshaw© @crawshaw69 Gabriel Agbonlahor is being questioned by the police for assault on a Woman named ‘Louis Tomilson’ during a charity match.”

So. What will the police do? Maybe they should introduce a curfew?