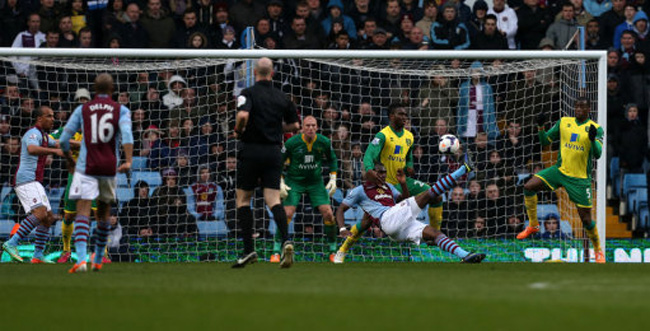 Aston Villa came from a goal down to register a vital win at home to Norwich on Sunday. Playmaker Wes Hoolahan had given the visitors the lead after just three minutes but between the 25th and 41st minutes, Villa shocked their opponents with a four-goal salvo. Christian Benteke netted two of those goals, both fine efforts with Leandro Bacuna and a Sebastien Bassong OG killing off the game before the end of the first-half.

After the break, the hosts had a few more chances to add to their lead with Paul Lambert and co. were more than happy with the 4-1 result, which sees them move seven points clear of danger. Chris Hughton’s Norwich, on the other hand, sit just four points above the drop-zone.