Aston Villa fans have started a petition after hearing that the FA banned had them from unfurling a massive Sex Pistols-themed banner at the FA Cup Final because it features the word ‘Arsenal’.

According to Wembley and FA statutes, flags and banners are not allowed to feature the name of a team’s opponents for fear of inciting city-wide zombie riots or some such nonsense.

The enormous 20×20 metre ‘surfer’ flag (i.e, it is designed to ‘surf’ over supporters’ heads in the crowd) was paid for by the Villa fans themselves, with supporters’ group My Old Man Said raising £3,000 via a crowdfunding drive to get the banner made. 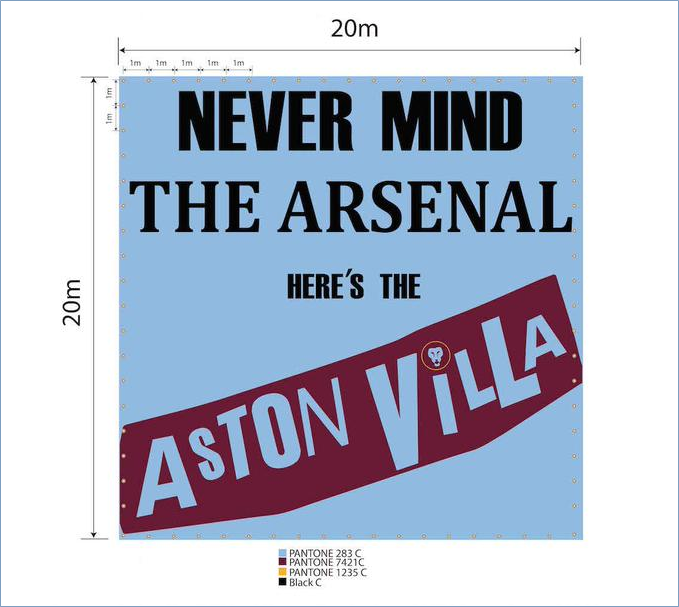 The very same group also checked with several of their Arsenal-supporting equivalents and found that none had a problem with the flag being unfurled at Wembley. Indeed, a combined statement from the Gooners said that they considered it an “honour” to even be mentioned on the banner.

As such, My Old Man Said have since launched a ‘God Save the Flag’ petition with the support of the Football Supporters Federation (FSF) in an attempt to overturn the FA’s ban.

“After getting the OK from their club to take a supporter-funded giant surfer flag to Wembley, over 200 Aston Villa fans raised £3000 to produce a surfer flag that met Wembley’s health and safety and size regulations.

“The surfer though has since been banned by Wembley simply because it contains the name of the opposition, despite the name only being used because Villa happen to be playing them in the final and it’s a necessary part of the design.”

The FSF also added that the the banner “isn’t offensive, isn’t discriminatory nor is it inflammatory,” and should therefore be allowed into Wembley.

Quite so. You can sign the petition here if you feel strongly about this kind of bureaucratic nonsense…