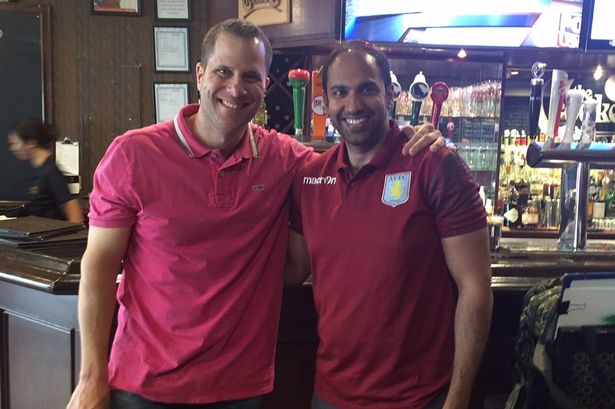 Aston Villa fan Michael Cappuccitti (that’s him on the left) is planning to make the long haul to watch his side’s first home game of the season against Manchester United on August 14th despite living some 4,000 miles away in Toronto, Canada.

Having made the trip to Birmingham and having paid through the nose for the privilege, Cappuccitti – ‘Capp’ to his friends – is then planning to donate his match tickets to local children who otherwise wouldn’t be able to afford to attend Villa games – which is jolly nice of him!

Michael first took up as a Villa fan two years ago after becoming disillusioned by the internal politics at his wife’s hometown club, which just so happens to be Barcelona.

He then publicly floated his services as a “huge football fanatic without a team to cheer for” only to receive a letter from Villa’s club liaison officer. He’s been an avid supporter ever since.

The 42-year-old property developer first donated two season tickets at the start of the 2013/14 before various health and work issues prevented him from doing likewise last season.

However, following a chance luncheon meeting with Villa’s community chief Ravi Masih (that’s him on the right), who was on holiday in Canada over the summer, Michael is now planning to get back in the saddle.

He told the Birmingham Mail:

During that lunch I told Ravi that I would not be donating two tickets for the upcoming season, and all seasons beyond that, but rather that I’d be donating four tickets, instead, for each game.

There was not a more rewarding thing I have ever done in my life than that ticket donation programme, and I cannot wait to re-initiate it this year.

What a thoroughly good egg!