COMPARED with Real Madrid’s current Best XI, it should be a breeze picking Barcelona’s first-choice line-up… 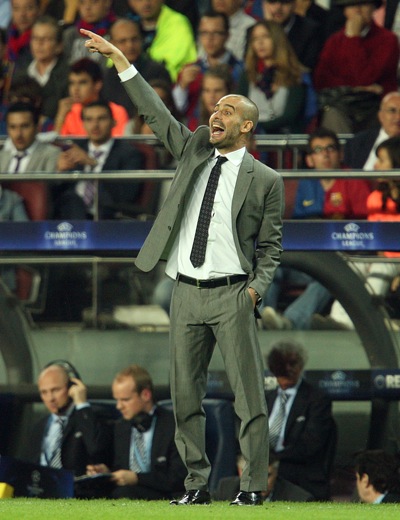 The formation: I’m going for a 4-2-3-1, with Biscuits in the holding role, and Xavi as the playmaker who never gives the ball away.

The back five picks itself, except at LB, where I chose new signing Adriano over Eric Abidal or Maxwell, mainly because Adriano is all shiny and new, and has huge potential.

In the heart of midfield, Busquets wins the ball then he gives it to Xavi. Simple. Xavi plays it up to one of Pedro, Messi or Iniesta. That should work. Up front, new signing David Villa can finish off those pretty tiki-taka moves.

A variation on this would see Zlatan starting up front on his own, with Villa moving onto the left wing. Iniesta and Messi shuffle sideways, Pedro drops to the bench.

Of course, this being Barcelona, the attack-minded players are pretty much interchangeable. If Pep Guardiola wants to move Villa out to the left flank, to drag a centre-back out of position, he can do that safe in the knowledge that Villa is flexible enough to do just that – as we saw in the World Cup. And Messi can play wherever the hell he wants.

It’s not only a brilliant team but a settled one. Over at Real, Mourinho has much work to do.

There, I’ve shown you mine, now you show me yours…