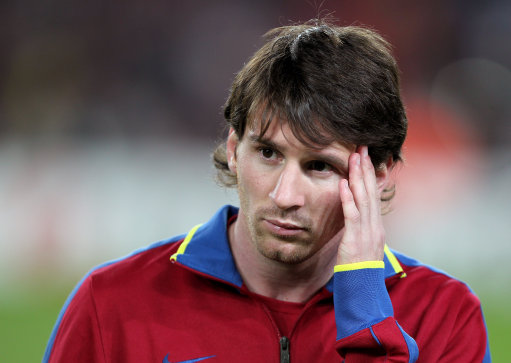 After netting 60 goals for club and country during 2010, Barcelona’s littlest ball of awesome Lionel Messi has been bestowed with the inaugural FIFA Ballon d’Or award (this is the first time that FIFA’s Player of the Year award has been merged with France Football‘s golden trinket, both of which Messi won last year), pipping teammates Xavi (you get the feeling this was probably his last chance to have his artisan talents formally recognised by FIFA during his playing days) and Andres Iniesta into second and third place respectively.

So said the ever-modest Messi:

“I’m surprised to win but pleased to be here with my friends, to win it makes it even more special. I want to share it with all of my friends, my family, all the Barcelonistas and the Argentinians.”

Apparently, neither Zlatan Ibrahimovic, who was voting as Sweden captain, nor Inter’s Samuel Eto’o, voting as Cameroon’s skipper, plumped for their former Barca cohort, with Real Madrid pair Iker Casillas and Cristiano Ronaldo also choosing to snub the diminutive Argentinian.

Real coach Jose Mourinho took home the Coach of the Year gong for his work in the field of ‘siege mentality’ with Inter last season, whilst the Ferenc Puskas Goal of the Year award was handed to Hamit Altintop for this absolute stonker against Kazakhstan…

…BOOF! A worthy winner I’m sure you’ll agree? Though I can’t help but feel Glentoran’s Matty Burrows should be slightly miffed that his ‘flying backheel’ effort missed out on the night.