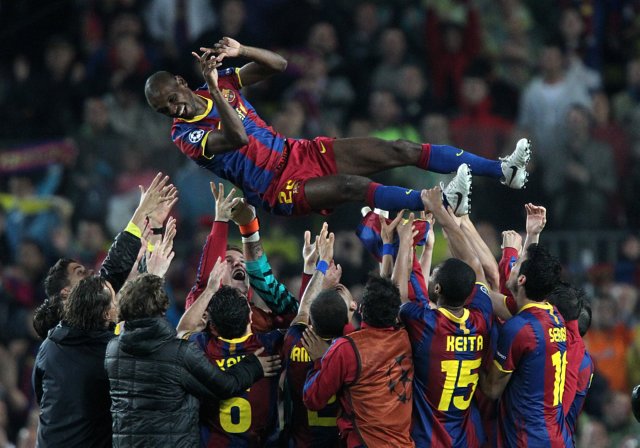 After undergoing surgery to remove a benign tumour in his liver just 48 days ago, Eric Abidal made his comeback for Barcelona at the tail-end of their Champions League semi-final second leg victory of Real Madrid last night – replacing captain Carles Puyol (anyone else flinch when he patted Abi on the side?) as the clock ticked over into stoppage time.

Said Abidal, after the game:

“It was a very important moment for me. I’ve worked hard to get back. I’ve had three very difficult weeks, but these things happen in life. The most important thing is to fight.”

“Each player has their own goals, and mine was to play in this match. I have many feelings about returning. I’ve seen people here I love, and they have helped me and the entire team.”

His appearance may have been little more than an emotional cameo, but the fact that the Frenchman was able to play at all is a feat unto itself – though being thrown repeatedly into the air by a gaggle of your teammates isn’t the kind of thing that GP’s usually prescribe to outpatients.