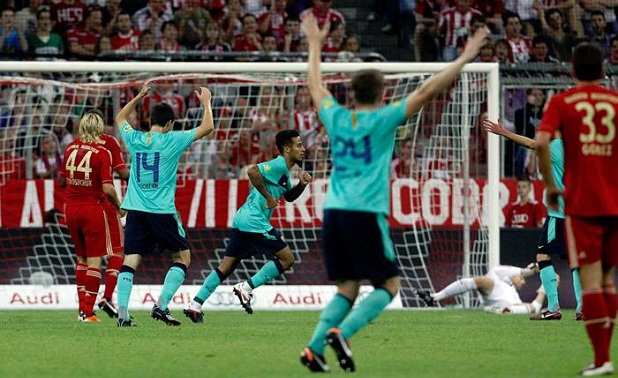 As you may or may not be aware, Barcelona got their pre-season underway with some low-level silverware last night – beating hosts Bayern Munich in the final of the Audi Cup after squeezing past Brazilian outfit Internacional on penalties the day before.

Over the course of two consecutive nights, Barca racked up four goals – 75% of which were stuck away by young midfielder Thiago Alcantara; a smartly taken opener against Internacional followed by a clambering header and a diabetes-inducingly sweet curling effort to cap off his mini-tournament against Bayern but 15 or so hours ago…

Yes, the game meant little to nothing, but just watching Thiago flit through the midfield at the Allianz Arena was enough to see why Barca have been so keen to bubble-wrap him as the heir apparent to Xavi’s throne.

Not that they are particularly similar players – the slightly skittish Thiago plays high in and around the final third, while Xavi tends to work his way forward gradually from deep – but when the old man’s knees finally get the better of him, Barca seem to have a ready-made, La Masia-indoctrinated replacement raring to go.

In fact, the way I saw it last night, it looks as though Alcantara is more likely to effectively replace Andres Iniesta, with ol’ yella (face) taking over from Señor Hernandez in the more reserved, ‘principal conductor’ midfield role.

Who knows? Not I. 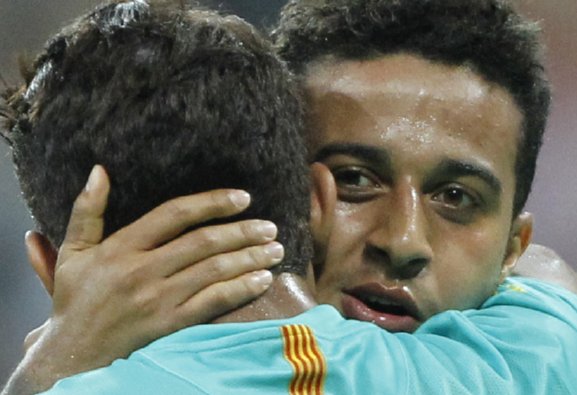 Of course, this isn’t the first we’ve seen of 20-year old, Italian-born Thiago (who is the son of former Brazilian World Cup winner Mazinho, no less).

Indeed, it was he that Arsene Wenger apparently asked to be included in any deal for Cesc Fabregas – a proposal given short-shrift by the Catalans, who promptly shackled the youngster to a new, five-year contract (with a buy-out clause of £81 million) at the Camp Nou up until 2015.

As well as a few brief cameos for Pep’s first-string last season, he was also the chancer that took the initiative and arched Spain’s second goal over the stranded Swiss ‘keeper from 45-yards in the final of the European U21 Championship last month – though it is the first time I’ve personally seen him play at first hand for more than just a few gratuitous minutes hither and thither.

For what little it’s worth, the verdict is good: this little urchin is gold.