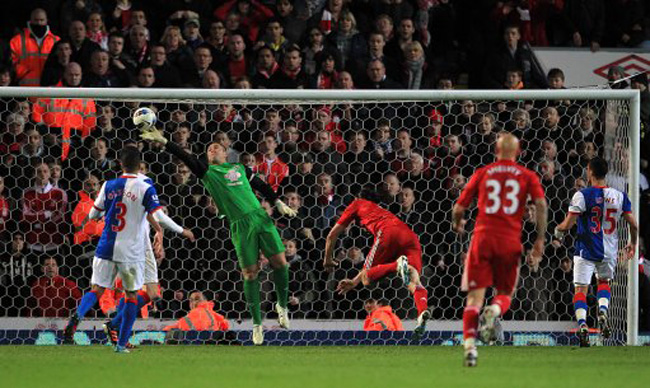 He’s done it! He’s finally done it! Liverpool’s divine ponytail, Andy Carroll, netted a dramatic winner at Ewood Park on Tuesday night as the Reds battled against a Rovers side desperate to stay clear of the drop-zone.

Maxi Rodriguez got the visitors off to a perfect start, courtesy of a quick-fire brace between 13 and 16 minutes. However, just 10 minutes later, the Reds were down to 10 men after Liverpool ‘keeper Alexander Doni saw red (he’ll now miss the weekend’s FA Cup semi-final Mersey derby). However, Yakubu missed with the resulting spot-kick, thanks to a Brad Jones save, but did evenutally get on the scoresheet on 36 minutes, heading home a David Dunn centre.

Liverpool battled to say in front, but then Yakubu was given another chance to score from the penalty spot, which he did, with just over an hour gone. Either side could have edged ahead in the final half-hour, but in the end, it was the much-maligned Carroll who netted the winner, heading home from close-range at the death.

King Kenny gets a much-needed win, while Rovers’ boss Steve Kean sees his side slide back into the bottom three.