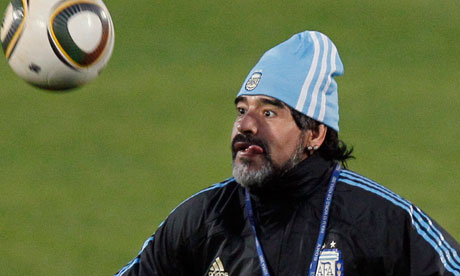 Since the ‘news’ broke yesterday morning that Blackburn’s new owners Venkys were about to replace the outbound Sam Allardyce with Argentinian barmball Diego Maradona, the Indian poultry conglomerate duly moved to quash the speculation by insisting that Big Sam’s successor is almost definitely going to be an altogether more prosaic choice.

However, Venkys’  chairwoman Anuradha Desai has confirmed that, upon their arrival at Ewood Park, initial contact was made with El Diego’s representatives – although talks quickly stalled, i.e. they were told to stop dicking around pretty smartish:

“We thought about Maradona as a coach after we took over. Talks were at the initial stage then, but there is no development on that front yet.

“For now, the current coach [caretaker Steve Kean] will be the manager till the end of the season. There is no question of signing anyone for such a short time.”

Of course, who needs a bloomin’ manager these days anyway? You can do it all on your fancy iPads and Gameboys.