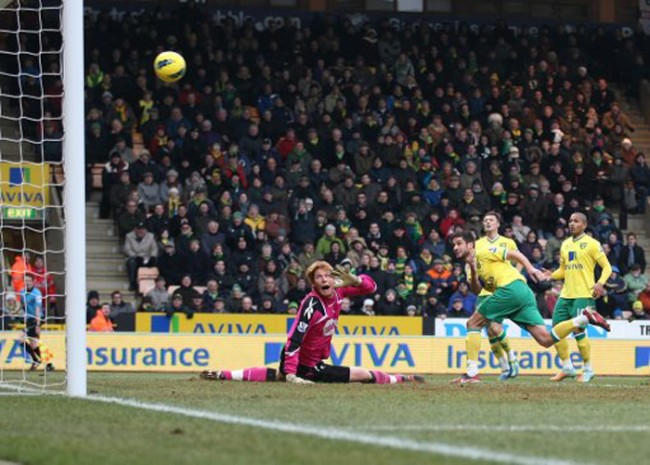 An injury-ravaged Norwich fought their away to their fifth home league win of the season on Saturday, a victory which condemned the visiting Trotters to another spell in the relegation zone.

The home had lost both centre halves, Daniel Ayala and Zak Whitbreak, to injury in the first-half but they still managed to boss the game at Carrow Road. Grant Holt and Simeon Jackson both went close for the Canaries in the first-half, while Andrew Surman saw his close-range effort come back of the crossbar when he really should have scored.

Bolton offered little in the way of a goal threat, with David Ngog coming closest to snatching the lead for the visitors. Eventually, the Canaries did make the breakthrough on 70 minutes, when Surman atoned for his previous bad miss after good work from Jackson. 15 minutes later, the Canaries were home and dry, when wideman Anthony Pilkington poked home after goalkeeper Adam Bogdan failed to hold on to a Russell Martin shot.

Norwich’s superb season continues, with the Premier League new-boys up to ninth in the table. Bolton, on the other hand, drop back into the relegation zone.