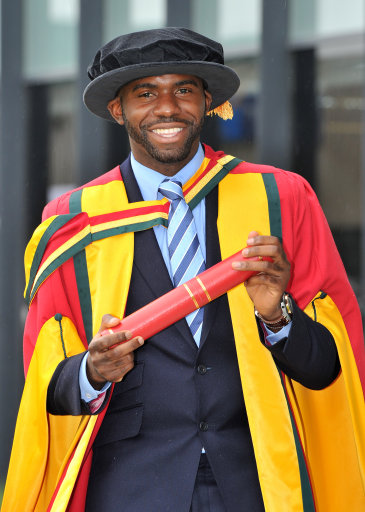 Aged just 23, Bolton’s Fabrice Muamba was pronounced dead for more than an hour after collapsing on the pitch at White Hart Lane before doctors and paramedics were able to revive him back in March.

It was nigh-on miraculous that we ever saw him walking again, but he did so – returning to the Reebok Stadium just six weeks later to thank the Bolton fans for their support during his convalescence – but the thought of Muamba ever playing football again seemed a step too far, even for the most dewey-eyed of dreamers.

Amazingly enough, word is seeping through that Muamba, ahead of undergoing a full medical assessment in Belgium and getting the official go-ahead to start playing professionally again at some point in the near future, has actually come through a light kickabout unscathed – playing in a 25-minute impromptu kickabout while on holiday in Dubai back in May (just two months after his cardiac arrest) with his former England U21 muckers Kieran Richardson and Jordan Henderson.

This is what Muamba told CNN World News, via Bolton Team Talk:

“I was on holiday and I was staying in a hotel and there were quite a few footballers in the hotel as well. The staff of the hotel usually play against the visitors so I was by the pool and I heard they were playing football.

“I was like ‘ah really?’ and I was like ‘yeah’ and there’s me thinking maybe I should try.

“Then I went across and saw other footballers playing and I told my friends and (fiance) Shona. I told her ‘I am sorry but I am going to play football’. She goes ‘are you sure?’ and I say ‘yes’ and I just went in there.”

The 24-year-old admitted his fiance was “scared” as he played for around 25 minutes. However, he had no problems and was just glad to be back in action.

“I just hope to God that I can get in there myself, with the 11 players on the pitch and to play would be fantastic.”

Sadly, the news has broke as a result of Piers Morgan plugging an upcoming interview with Muamba on Twitter, but we’ll do our best to ignore Morgan and his awful tear-baiting sob-harvest of a chat show – indeed, let’s not dwell on old greasy pig trotters and instead rejoice in a man overcoming all the odds despite the cosmos raining an almighty shit storm down on him.