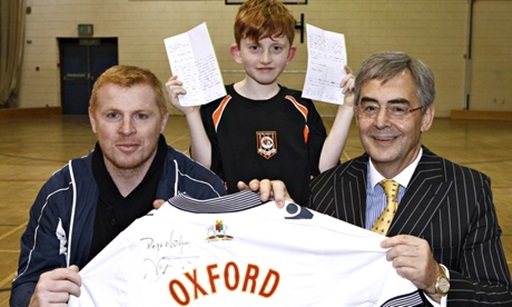 We know these “kid applies for manager’s post” things are ten-a-penny, but this one’s a little bit different in that the precocious young applicant was treated to a surprise visit from the chap who actually went on to get the job.

After Dougie Freedman was deposed as Bolton Wanderers manager at the start of October, the club received an application for the vacancy from nine-year-old Trotters fan Thomas Fielding.

Addressed directly to chairman Phil Gartside, little Thomas wasn’t shy about laying into the under-performing Bolton players in his letter – branding them “slow, unfit and overweight”.

Thomas, who is a season-ticket holder at Bolton, included his CV with the letter, listing his experience at U10s level with Oxford Grove FC before attempting to sway Gartside into giving him the job by adding: “I know that I am young, but I am cheap” before signing off ““BWFC Rulse”.

Alas, the Bolton board opted to appoint Neil Lennon as Freedman’s successor, with the former Celtic manager’s slightly more weighty experience winning out in the end – though the man himself helped ease the pain of rejection by turning up at Thomas’ training session with Oxford Grove on Thursday evening with a special wee gift.

As a peace offering from club to club, Lennon bestowed Thomas with a signed Bolton shirt with “Oxford Grove, 10” on the back.

Speaking to Bolton’s official website, Lennon said: “His letter was very similar to the one I sent in – it just had better handwriting!”