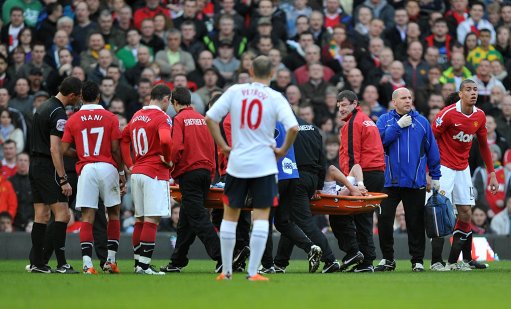 Bolton have confirmed that midfielder Stuart Holden will be out of action for the next six months after having his knee torn apart by Jonny Evans’ wayward studs against Manchester United on Saturday.

“First and foremost our main concern is Stuart and his recovery. He will get all the time and support he needs.

“Stuart has been outstanding this season and has shown he is one of the best midfielders in the Barclays Premier League.

“He has such desire, strength of character and a winning mentality and he will draw on those attributes in his rehabilitation.”

Holden also confirmed via his Twitter account that he has travelled to London today to undergo further surgery after having 26 stitches in the wound on the day of the match:

“I can promise you I will come back stronger and better than before. Have had back luck in the past and will continue to beat it.”

Holden then added the following update early this afternoon:

Seems like we’re doing a few too many of these at the moment but – get well soon Stu.