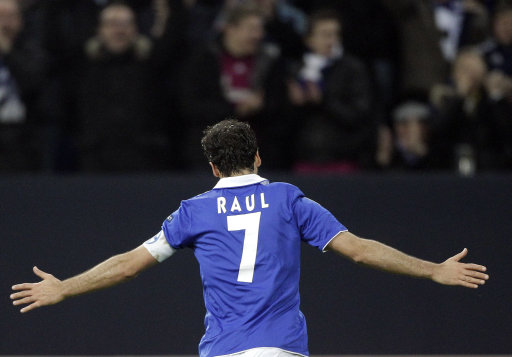 Maradona, Maldini, Riva, Moore and Cruyff are just some of the great names in football who, after having a monumental effect on their respective clubs, were given the ultimate honour of having their shirt number retired by those teams.

However, news from Germany that Schalke are to retire the no. 7 shirt in honour of their departing Spaniard, Raul, after just two years of service, does seem a little bit extreme.

Don’t get me wrong, the striker was one of the greats of his generation, inspiring Real Madrid to countless trophies (including six league titles and three Champions League successes). In his time at Schalke, his goals did inspire them to a domestic cup triumph, and he had a very good rapport with the fans, but he hardly had the sort of impact worthy of retiring his shirt number? Club bigwig Horst Heldt said:

“The number 7 is no longer awarded for an indefinite time at Schalke.”

Seems rather OTT, no?

Raul now plans to finish his career outside of Europe, most likely in a lucrative Middle-Eastern league.  And good luck to him.