With the city of Dortmund itself currently struggling with a escalating neo-Nazi scene, Borussia Dortmund have launched a new campaign designed to hit the right-wing lunatic fringe where it really hurts: their beer.

As part of a zero-tolerance approach to discrimination of any kind, Dortmund’s new campaign is called “No Beer For Racists” and had seen the club print one million beermats which have been circulated around local bars and clubs.

Now every time a racist buys himself a shandy in Dortmund, it’ll come complete with a reminder of just how much of a clown he is. 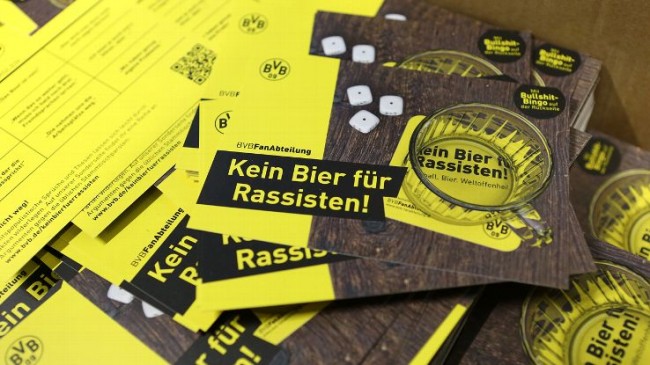 On Tuesday, Dortmund’s supporters club kicked off the “No Beer For Racists” campaign in earnest with a statement on the official website that read: “Borussia, beer — and Nazis? It does not fit!”

To go along with the beermats, the Dortmund website have also published an accompanying list of “hard facts against dull statements” in which they try to dispel some of the more popular prejudiced assertions being made in the city – “DEY TOOK UR JERBS!” and the like.

“Borussia Dortmund, the fan department and all BVB fans bear responsibility to take a clear stand against xenophobic and inhumane slogans rather than not listening to them,” said BVB president Reinhard Rauball.

“For tolerance and a colourful BVB; against racism and xenophobia.”