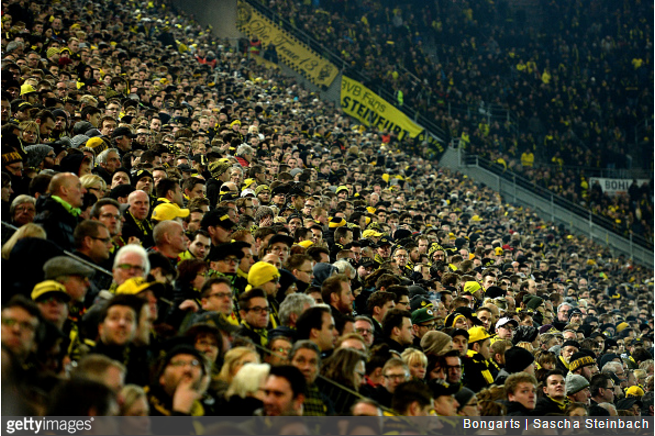 Borussia Dortmund beat Mainz 2-0 in the Bundesliga yesterday but the score was rendered little more than moot after two fans suffered heart attacks during the game, one of which was sadly fatal.

News of the incidents quickly rippled around the Westfalenstadion, with 81,000 supporters falling eerily silent while the match was still in progress.

Dortmund flashed a status update on their big screen, informing everybody of the tragic news.

As Sky Germany correspondent Alex Schaffer documented, you could have heard a pin drop…

You could hear a pin drop… Desperately sad. #BVBM05 pic.twitter.com/6BCWXTY0xI

What followed was as solemn a rendition of ‘You’ll Never Walk Alone’ that you’re ever likely to hear, as sung in unison by 81,000 mouring football fans…

In the name of Borussia Dortmund I wish to express my heartfelt sympathy and condolences to the families of those affected. Our thoughts are with them.

We were informed pretty quickly in the stands of what had happened. From that moment on the game fell right into the background.

I could no longer concentrate on it. The fans’ reaction was spontaneous. I’ve never experienced anything like it.

I can only pay a huge compliment to all of the fans for the way in which they expressed their sorrow and respect in this way, in a unified manner.

I take my hat off to the Mainz fans who, without exception, joined us in mourning and stopped supporting their team.

The scarves held in the air when You’ll Never Walk Alone was sung has my utmost respect.

It shows how deeply rooted honour and respect of each other exists and can be expressed in such a short period of time, and I can only take my hat off to that.