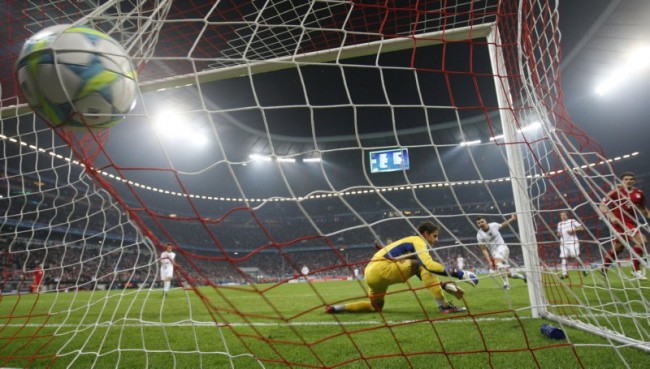 Trailing 1-0 from the first-leg, Bayern Munich racked up the biggest victory the Champions League knock-out phase has ever witnessed by sticking seven unanswered goals past FC Basel in the Allianz Arena last night to blunderbuss their way through to the quarter-final stage (that’s 14 goals scored in the last two games for Bayern, having pounded TSG 1899 Hoffenheim 7-1 in the Bundesliga last Saturday).

Arjen Robben opened and closed the scoring in the 11th and 81st minute respectively, with Thomas Mueller grabbing one before Mario Gomez weighed in with a hefty four – the first German player to do so in the Champions League – taking him to within two goals of Lionel Messi (who has 12) at the summit of the top goalscorer’s list and also setting the record for the fastest four-goal haul in Champions League history by doing it within 23 minutes, beating Dado Prso’s previous record by a few seconds.

“It was almost impossible for us. Basically we ended up watching the stadium clock and praying for it to end quickly.”

There goes a broken man.

One can only imagine how Crying/’Tired and Frustrated’ Man City Fan would have taken the defeat were he born in Switzerland. By committing Hara-kiri, most likely.