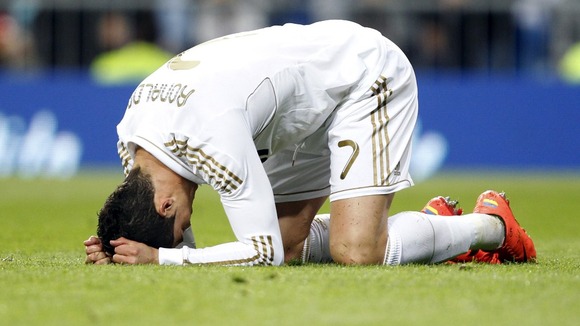 Real Madrid have lodged an official UEFA complaint about the security at the Allianz Arena after a thief broke into the dressing rooms and stole six pairs of boots and a handful of shirts before last night’s game against Bayern Munich.

Jose Mourinho let the press know all about the indignity of it all in his post-match presser:

“The stealing of Cristiano’s shoes is a shame, it’s impossible something like that could happen at the Bernabeu.”

Apparently the CCTV footage proved ‘inconclusive’ despite the dressing rooms at the Allianz being heavily rigged with cameras. The search continues.

On a completely unrelated note, if anyone is interested in purchasing a job-lot of gaudy orange Nike slippers then meet Pies on the bridge at midnight.

Or bring a friend.