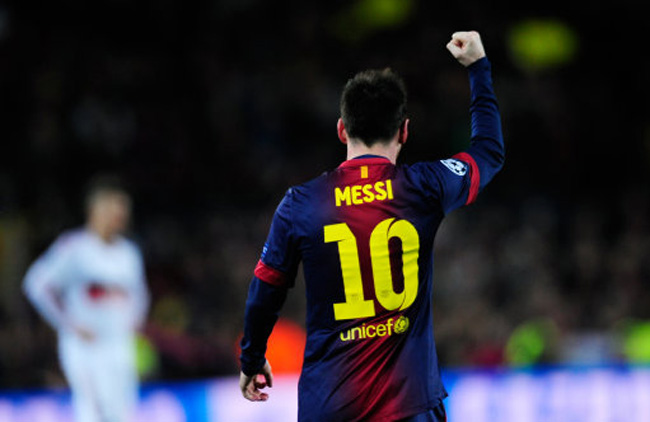 Lionel Messi was at his beguiling best at the Nou Camp on Tuesday night, inspiring Barcelona to a well-deserved 4-0 win against AC Milan, who had held a two-goal advantage coming into the game.

The Argentine magician had found the back of the Milan net after just five minutes, courtesy of a magnificent back-lift-free curler which goalkeeper Christian Abbiati could only watch as it flew into the top-corner.

The Rossoneri simply couldn’t deal with the home side’s trademark passing and pressing game but youngster M’Baye Niang did have a great chance to level the scores on 39 minutes after finding himself one on one with Victor Valdes. However, the French attacker’s effort came back off the post and that miss was to prove pivotal in the game as almost immediately, Messi made it 2-0, after firing home through Philippe Mexes’ legs. However, it was not the visitor’s night in any respect, as Messi had been in an offside position when he received the ball before scoring.

After the break, the Spaniards took the lead in the tie overall when David Villa evaded full-back Kevin Constant, before producing a sumptuous curling finish.

Massimiliano Allegri sent on Robinho and Sulley Muntari to rescue the tie and while the Italians did start to create chances, they never really looked like getting back into the tie. And then at the death, full-back Jordi Alba made it 4-0 to give the all-conquering Catalans a 4-2 aggregate victory. That win at the Nou Camp also saw a side two goals down from the first leg of a Champions League tie (and without an away goal) go on to the win the tie outright. Yet another record broken by Messi and co. It’s getting boring now!